German "metal queen" Doro Pesch has announced her first U.S. tour dates of 2020. Following her performances on this year's Monsters Of Rock cruise, set for February 8-13, Doro will take to the stage in the following cities:

Doro experienced success on a global scale with her latest 2CD studio album, "Forever Warriors, Forever United" (released in August 2018 via Nuclear Blast). The album achieved an astounding No. 1 in the vinyl charts and No. 4 in the album charts in Germany, No. 3 in Finland and No. 3 (vinyl) and No. 7 (album) in Sweden. It also landed No. 2 in the U.K. rock charts as well as numerous other top rankings across Europe and the USA.

"Forever Warriors, Forever United" was Doro's 20th album (including WARLOCK and live releases), and it is proof of her long-lasting chapter of the finest creativity and power. The album was released just in time for her 35th anniversary of live performances. The release included 25 brand-new songs, which all had one thing in common: incredible stylistic diversity paired with the highest quality.

In 2019, Doro toured across the globe playing to thousands of fans, including a massively successful USA tour with co-headlining legends METAL CHURCH. Now in 2020, Doro will celebrate at venues around the globe on her upcoming world tour that leads her once again across the USA in April and May. Doro is excited to continue the "Forever Warriors, Forever United" tour and bringing a smashing show to the USA, where she will play all of the highlights of her entire career, including all of the WARLOCK classics. 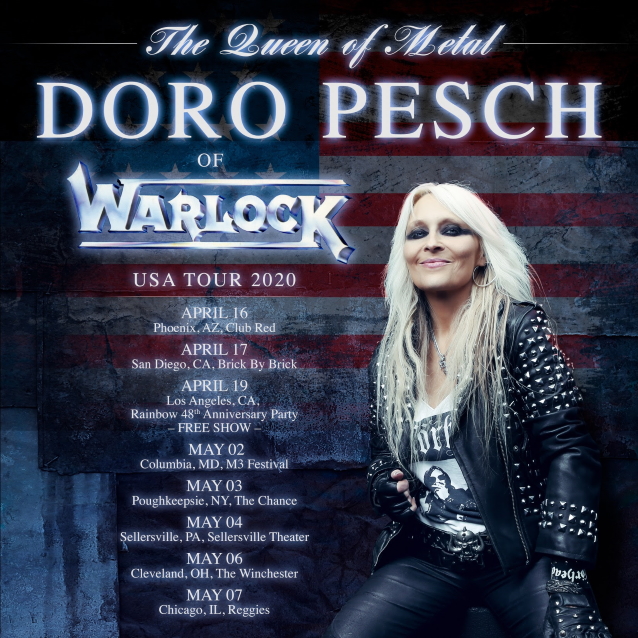