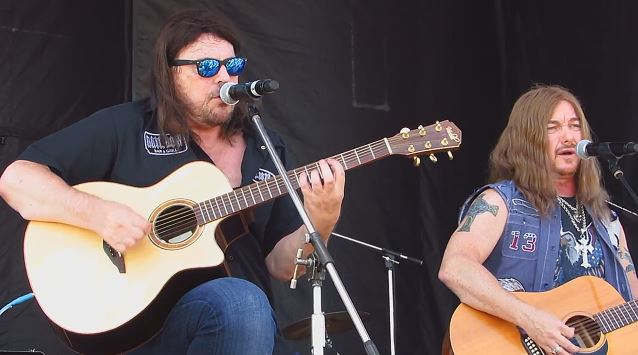 On the November 8 edition of "The Classic Metal Show", DOKKEN mainman Don Dokken announced that the band has parted ways with bassist Sean McNabb and has replaced him with Mark Boals (YNGWIE J. MALMSTEEN).

Said Don: "Sean is doing acting and solo projects and other bands. Sean's a very motivated guy and has got a lot of stuff going on, but I need a bass player that wants to be in DOKKEN... not to be in DOKKEN to promote himself, if you understand. There was a time when I asked him to turn down 'cause he was crushing everybody on stage with the bass volume, and I went over and asked him to turn down, and he didn't. So I went over and turned the amp down, and he walked back to the amp and turned it back up. Now, you don't do that in DOKKEN. You don't do that in any band. You don't do that in WHITESNAKE or PRIEST or anybody... If you do that as a hired gun, and you go up and the lead singer tells you to turn it down, and he turns you down and then you turn yourself back up, you'd be on a bus taking a slow Greyhound home. So that was kind of the last straw for that. And I understand.

"Like Sean said, he was promoting himself. And I said, 'Well, this is called DOKKEN, not MCNABB.'"

He continued: "Sean's a great guy. I love him to pieces. He's a good guy. We had, what, five or six that we played together. It was great. But I really felt that in DOKKEN, we were missing what we're famous for, and that's the harmonies.

"It's hard to replace Jeff Pilson. Jeff Pilson, he plays with a pick, which I like. I don't like people that play with their fingers. It's not the same. I like Peter Baltes-type bass players who play with a pick, and Sean doesn't. And so it didn't have a lot of 'attack.' And I needed a really killer singer that was as accomplished as Jeff Pilson. And he was sorely missed, you know. So I meet Mark Boals, who's played with Ted Nugent. He did four albums with Yngwie Malmsteen and he's a great lead singer. I didn't really ask him if he wanted to play in DOKKEN because I figured that he's a lead singer and that's what he does. So we had a gig a couple of months ago, and he was doing those acoustic shows with me. And he says, 'I play bass.' So I said, 'Let's play a show together and see how it goes.' So we rehearse with Mark on vocals and Mick [Brown, drums] and me, and it sounded amazing. And, as you see on the Internet, people go, 'I saw DOKKEN and the harmonies were awesome.' So I said, ' You wanna be the bass player?' He said, 'Yep,' And I said, 'OK, you're in.' So that's it."

Don added: "It wasn't like Sean was fired or anything. It's just Sean's got his solo stuff going on. I think he was doing some stuff with 'Sons Of Anarchy', and he's got other projects going on and other groups he plays in. I just thought... I need a bass player to say what I needed to hear, and that was, 'I just wanna be in DOKKEN.' And that's what Mark said. 'I'm not trying to promote myself. I'm happy not to be the lead singer. I'm happy to back you up, and if you can't hit all those high notes you used to when you were young, I can take care of that.' So, it's awesome, and he's a super-nice guy."

Joe Schaeffer Photography has uploaded video footage of Don Dokken and Mark Boals (YNGWIE MALMSTEEN, DIO DISCIPLES) performing an acoustic version of the DOKKEN classic "In My Dreams" on September 7 during the the Huntington Beach Food, Art & Music Festival in California. Check it out below.

DOKKEN's eleventh studio album, "Broken Bones", sold around 2,600 copies in the United States in its first week of release to land at position No. 173 on The Billboard 200 chart. Released in North America on September 25, 2012 via Frontiers Records, the effort was made available in two configurations: standard CD and limited-edition CD in digipak with a bonus DVD, which features a comprehensive "Making Of The Album" documentary.