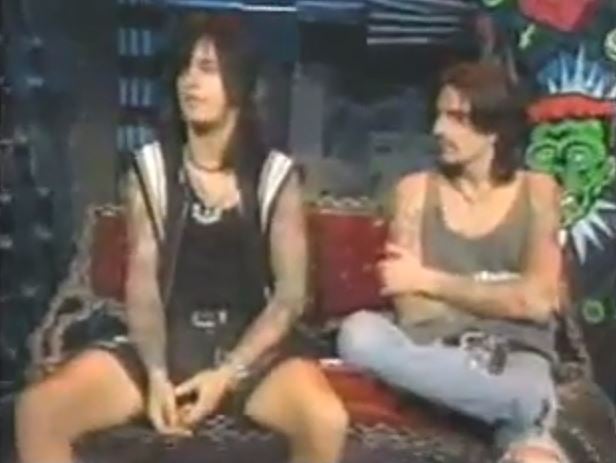 Sebastian Bach has posted a link to a 1994 interview with MÖTLEY CRÜE bassist Nikki Sixx which the former SKID ROW singer apparently feels supports Bach's claim that he was once asked to replace Vince Neil as the frontman of MÖTLEY CRÜE.

"Here is a fascinating interview with @nikkisixx where he describes the band MÖTLEY CRÜE rehearsing with Sebastian Bach. Enjoy!" Sebastian wrote on his Facebook page, before following it up with: "ABSOLUTLEY TRUE. @nikkisixx tells it like it is! Sebastian Bach Book on Book Shelves Soon... #ForTheWin #NoBullshit #Oops #YouCantMakeThisStuffUp #IAintMadAtYa #NotLying #ItsOK #SomeoneOwesSomeoneAnApology #ThanksForTheHype #IRememberYou"

In the above-mentioned clip (which can be seen below; skip to 3:50 mark), Nikki can be heard telling host Riki Rachtman of MTV's "Headbanger's Ball": "We said we owed it to ourselves to at least see what it felt like [to have a different singer]. At times when Vince was out of town or off doing whatever he was into doing, Sebastian Bach would come down and hang out with us. And we'd be rehearsing. We need a singer to rehearse. So he'd sing. Steve Perry from JOURNEY came down one time just to hang out and meet everybody. And he was singing. So we kind of had a feeling what it would be like to have a different singer. And we said, the least we could do is try it on for size before we, you know, end it. And we met John [Corabi] and it was magic."

After Bach revealed in a a three-word tweet to a fan on August 29 that he was asked to join MÖTLEY CRÜE more than two decades ago, Sixx quickly retorted that Bach's version of events never happened. Sebastian then took to his Facebook page to describe in some detail the circumstances behind his being asked to join the CRÜE, which included taking part in a full day's rehearsal with the band and a slew of phone calls between various managers, agents and label executives. "I was driven to rehearsal by Tommy Lee, and I spent a full day singing the MÖTLEY CRÜE set with the band MÖTLEY CRÜE," Bach wrote. "I remember the songs that Nikki asked me to sing that day. I remember the whole road crew's ecstatic reaction to us jamming together all day. And I remember Nikki's very generous, kind offer, at the end of our rehearsal, for me to join the band MÖTLEY CRÜE. I remember his exact words that he said to me in front of his whole road crew, Tommy and Mick [Mars] as well. It's not every day that your hero asks you to join his band."

On Friday (September 13), Nikki tweeted what appeared to be a short response to Bach's online rant: "Someone needs attention to try and sell some books." He then added: "I always liked the term 'washed up.'"