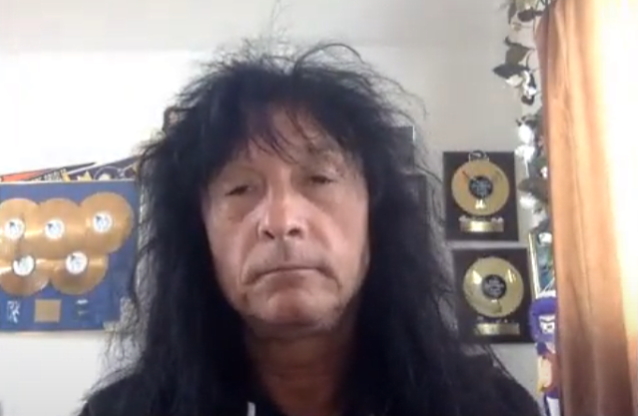 In a new interview with Jeff Gaudiosi of MisplacedStraws.com, ANTHRAX singer Joey Belladonna was asked if he has ever thought about the possibility of his band one day being inducted into the Rock And Roll Hall Of Fame. He responded: "I've never had a discussion with anybody about it. I don't think anybody's even been... Maybe on their own time, they might have talked to someone or they had a discussion. I've never had any. Once in a while, I might have said to somebody, 'You wonder if, by the time your time is up, are you gonna get in?' And at the same time, what is the Hall Of Fame now? Sometimes I don't know… Like when they pick stuff, sometimes you've got the FOUR TOPS in there or an R&B band; there's all kinds of different genres [in there]. It's, like, 'Who's next?' And there's a lot of bands that we both can name that should be in there but are not. Who is worthy of it? That kind of stuff. I hate even thinking about that stuff. I mean, hell, RUSH just got in there not too long ago. I wouldn't even wanna put myself in that position to even compare anything.

"I don't know how they pick [artists to induct into the Rock Hall]," he continued. "I'd love to sit around and listen to a roundtable [about] how they figure out who should be [in there] and what time is their time or whatever.