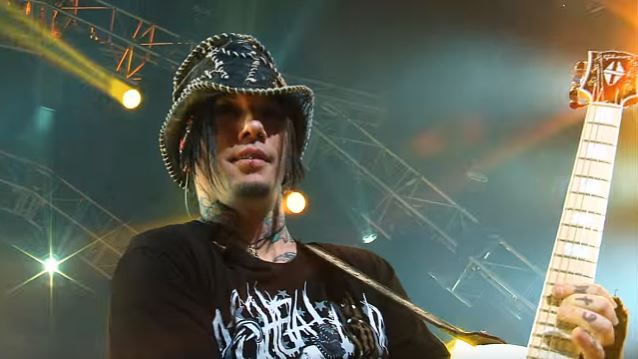 Former GUNS N' ROSES and current SIXX: A.M. guitarist DJ Ashba says that he "loves" the fact that that a partial reunion of GN'R's classic lineup is finally coming together, but hopes that Steven Adler and Izzy Stradlin will also be involved in the band's return.

Ashba, who joined GUNS N' ROSES in March 2009 following the departure of Robin Finck and stayed in the band until last July, was asked during a question-and-answer session on SIXX: A.M.'s Facebook page how he feels about GNR's reunion and guitarist Slash. Ashba responded: "I love it for the fans. However, I hope they bring in Steven, Izzy and even Matt [Sorum] and Gilby [Clarke]!" He added: "I've always been a fan of Slash's playing; that was a big reason why I took the gig!"

GUNS N' ROSES has so far announced six headlining performances in April, including two in Las Vegas and two at California's Coachella Valley Music and Arts Festival, with singer Axl Rose, guitarist Slash and bassist Duff McKagan slated to perform together again for the first time in 22 years.

The rest of the band's lineup for the shows — and a potential tour later in the year — remains unclear, although keyboardist Dizzy Reed, guitarist Richard Fortus, keyboard player Chris Pitman and drummer Frank Ferrer are all believed to be involved.

According to Alternative Nation, there is an "oversight management committee" handling GN'R's affair, with Slash, Axl and Duff each having a representative and a fourth person representing the other members.

Fan speculation around the involvement of original members Izzy Stradlin (guitar) and Steven Adler (drums) has been heavy, with Stradlin reportedly not interested in doing extensive touring and the band members not sure whether Adler, who has a longer history of drug problems than any of the other members, can hold it together on the road.

Ashba issued a statement in July 2015 saying that he was leaving GUNS N' ROSES. His statement read in part: "It is with a very heavy heart and yet great pride that I announce that I've decided to close this chapter of my life and encapsulate the wonderful times that I've shared with GUNS N' ROSES into fond memories. I have reached a point in my life where I feel its time to dedicate myself to my band SIXX: A.M., my adoring wife and family, and to the many new adventures that the future holds for me."

Ashba added: "I want to take a moment to thank Axl from the bottom of my heart for not only the most incredible experience of my life, but for truly believing in me. You are a true friend and a champion of mine and I am forever grateful. And even as I move on to pursue other endeavors, I will always remain one of your biggest fans. I also would like to thank each and every one of you fans for your love and support throughout the years."

Ashba said earlier in his statement that working with GUNS N' ROSES was "the most incredible journey I could have possibly imagined."