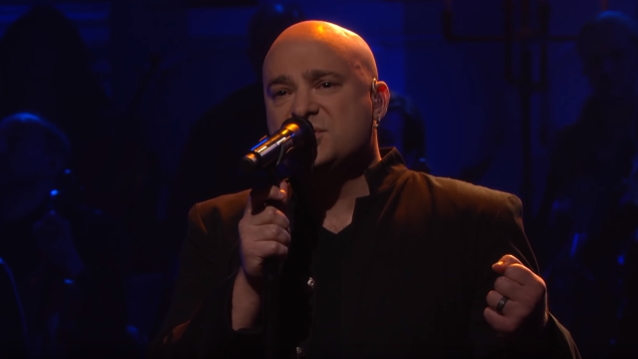 Video of DISTURBED's performance of its cover version of SIMON & GARFUNKEL's "The Sound Of Silence" on the March 28, 2016 episode of Conan O'Brien's nighttime talk show, "Conan", has been viewed more than 100 million times, becoming the first "Conan" clip to reach the milestone.

O'Brien broke the news of DISTURBED's feat on Twitter, writing: "@Disturbed's cover of "The Sound of Silence" is the first clip to crack 100 million views on my YouTube channel. I always knew that heavy metal band covers of Simon & Garfunkel songs would be my legacy."

DISTURBED's studio version of "The Sound Of Silence" went to No. 1 on the Billboard magazine Hard Rock and Mainstream Rock charts and became the band's highest-charting single ever on the Top 100. The music video has had over 569 million views. It's also been used in the soundtrack for "The Blacklist" and the video game "Rock Band 4".

DISTURBED singer David Draiman told the Colorado Springs Independent that he and his bandmates didn't have a clue that any of that would happen when they recorded the song and decided to issue it as a single and music video.

"How could we?" he asked. "It really, within the genre, was unprecedented. Never in a thousand years would I have dreamed it would be that massive and be used in all the places I've heard it used, figure skating, 'Dancing With the Stars', with the 9-11 Memorial and getting the blessing from Paul Simon, when we met him last year on Maui. The thing, surreal doesn't cover it."

"The Sound Of Silence" originally appeared on DISTURBED's sixth studio album, "Immortalized", which was released in August 2015.

.@Disturbed's cover of "The Sound of Silence" is the first clip to crack 100 million views on my YouTube channel. I always knew that heavy metal band covers of Simon & Garfunkel songs would be my legacy. https://t.co/Gw4bzAMCFV