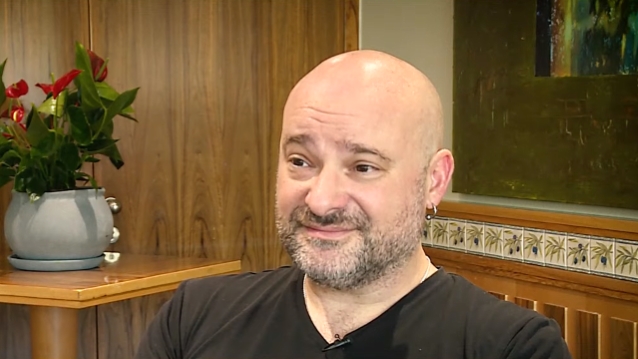 DISTURBED singer David Draiman, who is of Jewish heritage, says that Israel is facing "particular judgment and preferential boycotting" that no other country in the world has been forced to endure.

Draiman made his comments while speaking to i24News ahead of his band's performance in Tel Aviv two weeks ago. He said (see video below): "Israel gets particular judgment and preferential boycotting that literally no other society is subject to. The Chinese treatment of their homegrown Muslim population and the internment camps that they're in — millions being subjugated and thrown into re-education programs. How they brutalized their LGBTQ communities. Places like Venezuela and Syria and the Sudan and all over the African continent, which are committing grave crimes against humanity. Even our partners with the United States in Saudi Arabia and many other states, the atrocities they continue to commit, none of them get the level of judgment and scrutiny that the Israeli government does.

"[Israel is subjected to a] really unfair amount of unjustified treatment and persection. There is no sense to it. There isn't logic behind it. There isn't another people on the planet that are treated the same way."

A number of artists, including Roger Waters, have been vocal in their support of the Boycott, Divestment and Sanctions (BDS) campaign, which calls for economic pressure on Israel to end the occupation of Palestinian land, grant Arab citizens equal rights and recognize the right of return to Palestinian refugees. It recently called on artists, music fans and broadcasters to boycott the Eurovision Song Contest in Tel Aviv, arguing it amounted to "whitewashing" Israel's policies towards Palestinians in the occupied West Bank and the Gaza Strip.

"I don't understand the point," Draiman said about the Israel boycott by certain artists. "What are they really hoping to achieve by holding back their art from the general population? What good is that going to do? Even if you subscribe to the notion that it will achieve something to boycott goods and the services from these specific quote-unquote occupied territories — and that's a whole another topic of vast discussion and debate — what is the justification in holding back your creativity and your art? Music and art was created, and is created, to bring people together — not to separate them. It's meant to build bridges, not to burn them down."

Draiman also once again directed much of his venom squarely at Waters, one of the most vocal advocates of a cultural boycott of Israel, whose view of the Middle East changed after a 2006 trip to Israel, where Waters played a gig at the end of the European leg of his "Dark Side Of The Moon Live" tour.

"His unbridled hatred is so severe and has affected his psyche so much, he's rewriting his own history," David said. "The man played Israel, and the way that he'll tell you the story of that performance is very, very different to what actually happened, to the footage that exists on tape that you can actually look back at and refer to and know that he's full of shit. It doesn't cease to amaze me, the lengths that him and those like him will go to distort truth on behalf of their ridiculous hateful narrative. You can't have a rational debate with people like that. It's like trying to play chess with a pigeon who just ends up shitting all over the chess board and insisting that he won."

Asked what message he had for the BDS supporters who hold an unfavorable view of the Jewish state, Draiman said: "If you divorce yourself from the narrative for just a moment and try to look at people as people, and stop trying to blame all the ills of the world on any sect of people, and learn a greater appreciation for the human beings behind the idealogy, you may end up surprising yourself.

"It's been my absolute pleasure, over the course of my career, on a number of occasions, to be able to dispel the mythology behind what Jews are supposed to represent to those people," he added. "And I've been able to, early on in my career, turn hardcore Nazi skinheads away from their way of life —on more an occasion. Because, 'Wait a minute. You can't possibly be Jewish.' 'Yeah, I am.' 'How? You are this guy on stage. And I love your music and your message and your songs. And you're a good person, and you don't have horns growing out of your head. I don't understand. Everything they told me wasn't true.'"

DISTURBED performed in Israel for the first time on July 2.

Although the 46-year-old singer had visited the country many times before, this was the first DISTURBED concert in the Jewish state.

The DISTURBED song "Never Again", from 2010's "Asylum" album, was written about the Holocaust and calls out people who deny it.