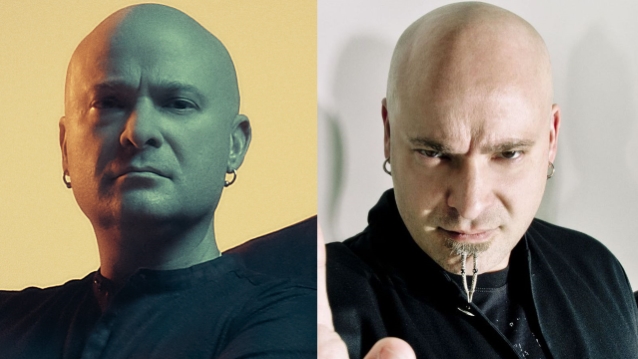 In a brand new interview with Germany's Deutsche Welle, DISTURBED singer David Draiman spoke about his decision to finally remove his signature double labret vertical piercings, the long hook- or talon-shaped decoration that came down over his chin. "They're kind of a pain in the butt, to be honest," Draiman said about the piercing, which was customized to fit his chin. "It just felt kind of weird walking around like a 45-year-old Hot Topic kid," referring to the retailer of alternative culture-related clothing and accessories popular with Middle American millennial shoppers. "I just felt it was time."

During the Deutsche Welle chat, Draiman also defended his recent comments in which he called DISTURBED's upcoming "Evolution" LP "our 'Black Album,'" referring to METALLICA's self-titled fifth record, which saw the band step in a more melodic direction than its previous thrash metal sound and helped garner a mainstream following.

He said: "It's simply a matter of something that every rock and every metal band aspires to — they all want to write that record that takes them to the next level. And that's what the 'Black Album' did for METALLICA and that's what I'm hoping this record does for us. Just in the sense that I hope that we can have a similar type of stars aligning and fate taking a hand and things really exploding the way we hope it will."

"Evolution" will be released on October 19. Like 2015's "Immortalized", DISTURBED's new album was recorded at The Hideout Recording Studio in Las Vegas, Nevada with producer Kevin Churko.

The first single from "Evolution", a song called "Are You Ready", is No. 1 on Billboard's Hot Mainstream Rock Tracks chart for the third consecutive week, with over five million Spotify streams and a companion video with more than five million YouTube views. It's the band's 12th No. 1 single and the fastest chart-climber of the group's career.

Earlier this week, the two-time Grammy Award-nominated quartet teamed with SiriusXM for an electrifying hometown show at Chicago's Vic Theatre. This special performance will air October 18 on SiriusXM's Octane and Turbo channels.

On October 23 and October 24, DISTURBED will partner with the USO to perform for the Airmen at Creech and Nellis Air Force Bases in Indian Springs and Las Vegas, respectively. In addition to the performances, the band will take part in USO morale engagements to visit airmen where they work and learn more about the important missions at each base.