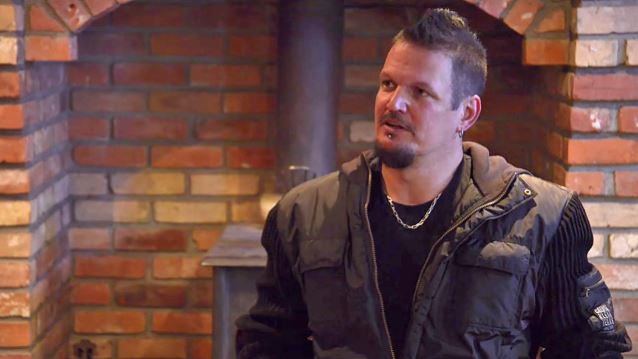 DISTURBED guitarist Dan Donegan has commented on this past Friday's (June 26) historic 5-4 ruling by the U.S. Supreme Court that made same-sex marriage legal in all 50 states. Speaking to Planet Radio 105.1, Donegan said: "I think it's great. Who are we to judge what makes other people happy? It doesn't bother me at all. I think it's amazing. I think it's the way it should be. I mean, I don't look for somebody's approval on what I need to make me happy in my life. So I see no problem with it at all. And if people have a problem with it, then they can look the other way. It doesn't affect me at all. I think it's all about being happy. So I'm not here to judge anybody."

The landmark ruling is the most significant change in laws governing matrimony since the court struck down state bans on interracial marriage nearly 50 years ago.

The majority opinion was penned by Justice Anthony Kennedy, who wrote, "No union is more profound than marriage, for it embodies the highest ideals of love, fidelity, devotion, sacrifice and family. In forming a marital union, two people become something greater than once they were. As some of the petitioners in these cases demonstrate, marriage embodies a love that may endure even past death."

DISTURBED's first new album since 2011, "Immortalized", is due out August 21. The CD is available for pre-order everywhere and follows 2010's gold-certified "Asylum", DISTURBED's fourth consecutive No. 1 on The Billboard 200 album chart.

In addition to 15 new songs — including 12 on the album and three more on the deluxe edition — "Immortalized" contains a cover of SIMON & GARFUNKEL's "The Sound Of Silence".

DISTURBED has yet to announce tour plans behind the new record.