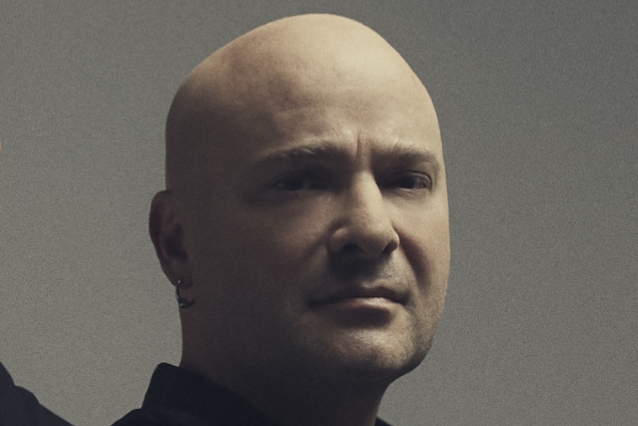 DISTURBED frontman David Draiman spoke to Music Connection about the band's decision to include a number of politically oriented tracks on its latest album, "Evolution".

"When we go political, we try to make sure the knife cuts both ways," the singer explained. "The forces that precipitate the vicious cycle of conflict on this planet do not pledge allegiance to either the left or the right or the center. They take advantage of everyone. It's not a conspiracy theory to think there are people who profit from us killing each other. And why should we continue to perpetuate that vicious cycle?

"'Savior Of Nothing' calls out the would-be social justice warriors of the world who become so enveloped in fighting so passionately that they become exactly what they're trying to correct," he said. "They preach acceptance so much they become unaccepting. 'In Another Time' talks about our addiction to technology.

"When we touch on any subject matter that can be deemed 'political,' I like for it to be something that's applicable to people no matter what side of the fence they fall on."

Asked what advice he has for artists who want to remain politically active but don't want to alienate fans, Draiman said: "It's impossible. You're going to end up alienating somebody no matter what you do. It's impossible to utilize your right to free speech in the way you truly deserve and not suffer repercussions on any level. So your best bet, to be honest, is to simply not engage in it. Be something that sets people free from that, not throws them back into it.

"Don't get me wrong — there are plenty of great rallying cries and protest songs," he continued. "We write them ourselves. But it's one thing to write about a subject matter you're passionate about as an artist and another thing after you've put the microphone down and then pick it back up and start preaching from a podium. If you're willing to do that, more power to you. Just know there are going to be consequences. It's simply something I'm no longer willing to engage in on any level."

Draiman recently said that he is "never returning to Twitter," more than three years after deleting his account on the social media platform.

Last August, Draiman admitted to SiriusXM Octane that while he does not have an official presence on Twitter, he still uses the platform "as a news tool. I still have a 'shadow' Twitter account," he explained. "But I don't tweet, I don't spew anything. It's just there for me to be able to get my news."