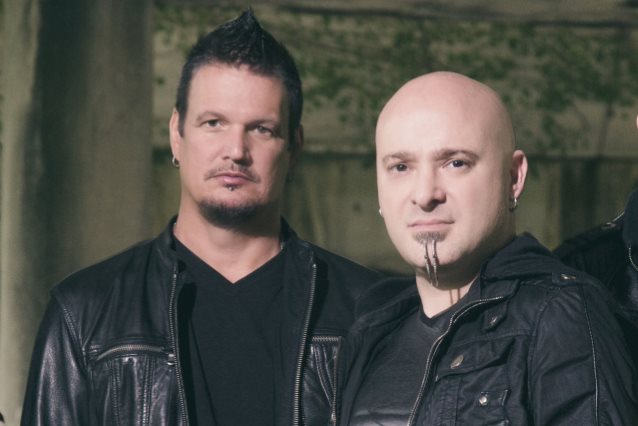 "Loudwire Nights" host Toni Gonzalez spoke with DISTURBED's David Draiman and Dan Donegan at Rock On The Range about AC/DC's decision to use Axl Rose as the the lead singer of the band's current tour after Brian Johnson was advised to stop playing live or "risk total hearing loss."

Draiman was the first to offer his opinion, saying: "I think [Axl has] already proven that it's not only been an amazing thing, but that he's certainly up to the task.

He continued: "Everybody is very quick to point fingers and try to make somebody the bad guy. I don't think there's a bad guy in this situation. I think that they all have to deal with this unfortunate scenario that's been thrust upon them. And you know what? Axl has the chops. He's been showing it. He's been killing it with GUNS N' ROSES vocally; he's been killing it with AC/DC vocally; and doing it from Dave Grohl's borrowed throne, for God's sake, which is not easy, technique-wise. To execute all of that vocally from a sitting position is incredibly difficult; it takes tremendous precision and technique."

Draiman added: "If I was wearing a hat, it would be off to [Axl], because he was worthy before this, but certainly since the reunion and since the shows that have happened of late that I have been able to enjoy and watch online, he's worthy of tremendous praise and tremendous respect."

Donegan had a slightly different point of view, explaining that: "I agree that [Axl is] fully capable and he's fully talented and that. I think, from a fan perspective, I would have liked to have seen the smoke clear a little bit from the first initial news of Brian to let us digest the fact that he's no longer with the band. It just seemed really quick to have to not only accept that but then the band just immediately move on. I'm not knocking it — that's their opinion or their preference — but, I mean, it's like a marriage. If your wife dies and then immediately you're dating somebody next week, it's, like, 'Wait! Slow down for a minute. Let the kids digest the idea that they just lost their mother.' And it's that…. Like I said, coming as a fan, I would like to digest it a little bit more before I'm ready to accept somebody else jumping in that role.

"If they come through town and I get a chance to see it, I probably would go see it, 'cause I still think the band's talented, Axl's talented," he admitted. "But I would have preferred a little bit of downtime to digest the whole thing and accept that Brian was gone to begin with."

AC/DC is currently in the midst of a European run with Axl Rose on the mic. Rose will also join them for the ten North American shows that need to be made up starting in late August.