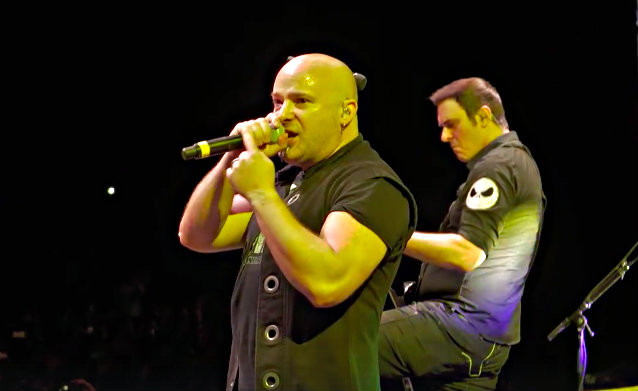 DISTURBED singer David Draiman joined BREAKING BENJAMIN on stage last night (Friday, August 12) at the Gexa Energy Pavilion in Dallas, Texas to perform a cover version of the PANTERA classic "Walk". Video footage of the collaboration can be seen below.

Draiman has often praised late PANTERA guitarist "Dimebag" Darrell Abbott for his hospitality, friendship and partying spirit, recalling a few years ago: "During our second Ozzfest, we were holed up in Dallas for about two or three days … hanging out at Dime's place — it was an eclectic house. There's all kinds of PANTERA memorabilia and Dimebag memorabilia all over the place. But you could never make the mistake of falling asleep at Dime's. He'd wake you up the way he always did: with firecrackers. He'd always set off an entire chain of firecrackers not two inches from my head. One time … Dime took us to a strip club where we all judged a bikini contest. There was never a wrong time in the day for Dime to hit a strip club. … Dime was just this character who was very easy to love. He didn't have a bad bone in his body, and was ready to give you the shirt off his back at all times. It was his mission in life to make sure every single moment you spent with him was the best moment of your life. He was selfless."

DISTURBED and BREAKING BENJAMIN kicked off their tour at the Lakeview Amphitheater in Syracuse, New York on July 9. The trek — which also features ALTER BRIDGE and SAINT ASONIA as support — includes stops in more than twenty cities across North America.