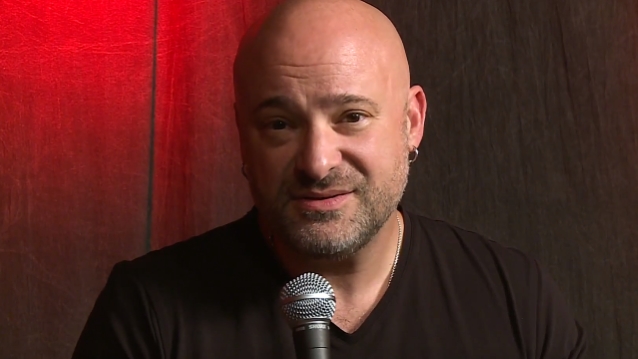 David Draiman has told HardDrive Radio that DISTURBED's massively successful cover of SIMON & GARFUNKEL's "The Sound Of Silence" has had a profound effect on him and his bandmates. While they had another No. 1 Mainstream Rock Songs hit from 2015's "Immortalized" with their original tune "Open Your Eyes", the triple-platinum "Silence" spent seven weeks at No. 1 on the Mainstream Rock Songs chart, two weeks atop the Rock Digital Song Sales chart and reached No. 3 on Hot Rock Songs. Further, the song reached No. 42 on the Hot 100 and garnered a nomination at the 2017 Grammy Awards in the category of "Best Rock Performance."

"Obviously, what happened from the 'Immortalized' record was we achieved a level of success that, to be perfectly honest, was unpredecented in our career," the singer said (see video below). "Every track released from that record ended up going No. 1 at radio. All the responses to it were just so overwhelming, and in particular with the obvious crossover explosion of our cover of 'The Sound Of Silence', which ended up becoming a worldwide phenomenon and is now nearing on half a billion views; I mean, it's just insane. So a lot changed."

He continued: "It used to be that whenever I walked around without my old piercings that I was very rarely recognized — it wasn't a common thing; I could be somewhat incognito. It doesn't matter anymore. Because my face was so front and center in [the 'Silence'] video and it's been viewed so many times by so many people, now it's, like, it doesn't matter whether I have 'em or not, people know."

Draiman also touched upon his decision to finally remove his signature double labret vertical piercings, the long hook- or talon-shaped decoration that came down over his chin. "I felt it was time to do away with 'em," he said. "They're cumbersome and just annoying and a pain, and it didn't feel right at this age. I've got all this nice salt and pepper going on over here," referring to his facial hair with a laugh.

David said that he was surprised at the reaction from the rock and metal community after BLABBERMOUTH.NET first posted an article about the absence of his trademark piercings. "What I thought was hysterical was is that when the Metal Hammer article came out earlier on [when DISTURBED's new album, 'Evolution', was first announced], it was pretty obvious I didn't have 'em in, so why didn't people lose their minds at that point?" he asked rhetorically. "What was the catalyst that all of a sudden launched a hundred articles that people went crazy about it?"

Draiman added: "I really don't think that anybody's going to buy or not buy a DISTURBED album and/or ticket because I am or am not wearing my labret piercings."

DISTURBED released its seventh studio album, "Evolution", last Friday (October 19), with the band also rolling out the details of the North American leg of its 2019 "Evolution" world tour. The trek will kick off on January 9 in San Diego, wrapping up on March 8 in the band's hometown area of Chicago. Support on the 27-city jaunt will come from Canada's THREE DAYS GRACE.

"Evolution" has been billed as DISTURBED's most diverse offering yet, and Draiman admitted the band was a little nervous about how fans would react. "I'd be lying to you if I said that we weren't a little bit frightened [laughs] by, you know, what potentially the reaction could be to it," he told The Pulse Of Radio. "But at the end of the day, a great song is a great song. It's not easy going into uncharted territory. It's not that automatic sense of comfort that you get from going into the territory that you're used to navigating. So there certainly was internal apprehension of a sort, but that was quickly overcome."