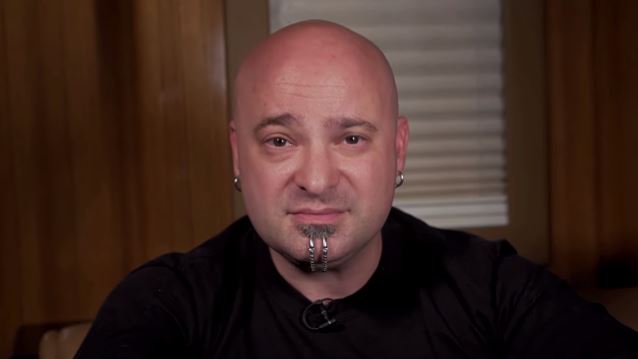 DISTURBED frontman David Draiman has once again apologized to the fan whom he called out for texting during the band's show in Dallas in March. In an interview with "The Jasta Show" podcast, Draiman said: "That whole thing, it was meant to be funny. What is your job as the frontman? To find the one person in the crowd… Like he said in 'Almost Famous', and it was kind of like a joke in the movie: 'I find that one person in the crowd that isn't getting off, and I get them off.' That's the idea. And so I saw one person that seemed detached. And I wasn't trying to do it to make her feel horrible. I was trying to pull her in. It was meant to be funny. I did it jokingly and laughingly, and her husband was sitting there laughing while it was going on. Obviously, he wasn't laughing afterwards. And I had no idea what she had going on; I had no clue. And you know what? In the age of social media and the Internet, things get really, really hot and heavy really quickly."

He continued: "I still feel terrible, that if that's what she was going through, and I made that worse for her, I feel horrible about it. And I don't ever want to make any fan of ours feel unwelcome or estranged in any way. It was more to, like I said, try and pull her in than push her away. And, unfortunately, it ended up pushing her away. And that's something that — to be perfectly, perfectly honest — I deeply regret."

Draiman added: "Again, sometimes in today's age, you can't know everything, and so maybe certain tactics like that — like I said back then, and I'll say it again now — I think are now stricken from my repertoire. Let me just be the guy up there singing and be the glorified cheerleader of sorts, and that's fine. I don't have to do some of the things that I've done in the past and have done for years, because, to be perfectly honest, we're dealing with a day and age when people are really a lot more sensitive and they have the ability to immediately express themselves. And how could you predict? How can you deal with it? There's no way. So it's better to just not touch it."

The DISTURBED frontman went on to say that he doesn't have a problem with cell phones at concerts or people videotaping the band's shows. "I'm flattered by it," he said. "It was just one moment that got taken to Level 10, because — ah! — here's another opportunity for the media in general to pounce. And that's what they do; that's what they do. Any excuse, any opportunity, any potential clickbait, here you go. Let everybody who is already a hater to begin with, give them a doorway to go in and have a field day and lose their minds over it. And you know what? Everybody that did, if you enjoyed yourselves, if it gave you five minutes of levity, of whatever, God bless. At my expense? It's fine. I'm a big boy. I've got big shoulders.

"I said my apologies to the woman. I still feel bad about it, like I said. I have no intention of ever doing anything like that again. And it is what it is.

"People are gonna hate for whatever reason they can come up with, and you don't need to give them one.

"I'd rather have people that are passionate one way or the other as opposed to being passive."

DISTURBED bassist John Moyer previously defended Draiman, telling a radio station earlier this year: "David's always had a long history of, anybody who seems distracted or not into the show, he engages them, and that's part of what makes him a great frontman. He not only sings to the audience, but he makes sure that everyone is part of the experience. And when you're not, he focuses on you and he brings you in, and that's all that was about."

The woman, Shannon Pardue, told the Dallas Observer that she was texting her 14-year-old daughter to calm her down as a hailstorm raged outside their house in a Fort Worth suburb.

Pardue said she began texting during the break between DISTURBED's main set and its encore. It was during this time that Draiman called her out from the stage, saying: "What is so important going on in the world that you need to be texting the entire fucking show? The whole show! You're right up front; I can see you clear as day. You've had your face in your fucking phone the whole goddamn show."

Pardue said she tried to shout to Draiman that she was texting her kids, but he couldn't hear her. After video of the incident went viral, Draiman first said online that she was "not a fan," but later apologized.