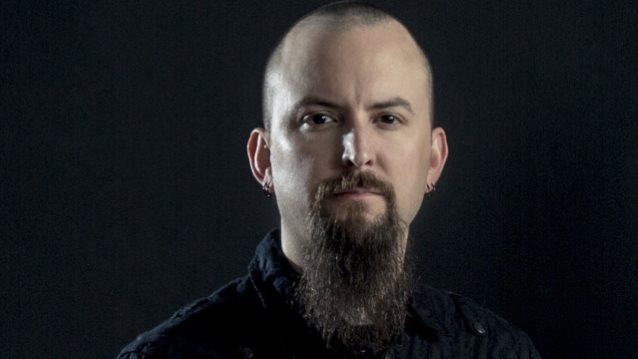 DISTURBED drummer Mike Wengren says that his band was never part of the so-called "nu metal" genre in the mid-'90s to the early 2000s, explaining that his group just "happened to come out around the same time" as some of the other bands who got lumped in that category.

Essentially a fusion of rap and alternative rock (arguably born out of RAGE AGAINST THE MACHINE), nu metal inexplicably swept the airwaves and peaked for a brief period in the late '90s and early 2000s, with Gregory Heaney of AllMusic describing the genre as "one of metal's more unfortunate pushes into the mainstream." Along the way, several bands associated with nu metal, including KORN, DEFTONES and SLIPKNOT, took a somewhat defensive stance against being labeled as such. Even those less apologetic nu metal groups eventually changed their sound, effectively disowning the genre that they helped pioneer.

"I don't think we were ever a nu metal band to begin with," Wengren tells Westword in a new interview. "I just think we happened to come out around the same time. Unfortunately, as great as some of those bands were, they're not around anymore.

"I think that we have a connection with the fans, we write music about real stuff, and people are able to connect to that, whether it's through the power of the music or being able to connect through the experiences of the lyrics. I think they get it, so they stuck with us for all these years."

Wengren's comments echoed those made by DISTURBED guitarist Dan Donegan several years ago when he told We Love Metal: "I think we got lumped in that category because we came out at the same time that category was added and a lot of these bands started to come out in the late '90s is the same time that we got signed. We were fortunate to have outlasted that by riding that wave and showed that we have always been influenced by the classic metal bands, so there was nothing nu metal in our minds about what we were doing.

"Nu metal, to me, at the time was bands that were incorporating turntables and little bits of hip-hop with metal guitars and drumming, and I respect some of those bands that did it… I was fans of some of those bands that did it, but the bands that inspired us to pick up an instrument were the first bands — BLACK SABBATH, IRON MAIDEN, JUDAS PRIEST, PANTERA, METALLICA, QUEENSRŸCHE — those were always guitar-based, riff-driven, double-bass, hard, slamming, powerful melodic vocals. Those are the ingredients that we have. I guess we have always just viewed ourselves as a metal band trying to expand and follow in the footsteps of the greats."

DISTURBED's sixth studio album, "Immortalized ", was officially certified gold on September 23 by the RIAA (Recording Industry Association of America) for sales of more than 500,000 copies. The certification came seven months after RIAA started including on-demand audio and video streams and a track sale equivalent in gold and platinum album award.

"Immortalized" features DISTURBED's version of "The Sound Of Silence", which has been a huge hit for the band.

Released in August 2015, the album became the band's fifth LP in a row to enter the chart at No. 1 — a feat shared only with METALLICA and DAVE MATTHEWS BAND.