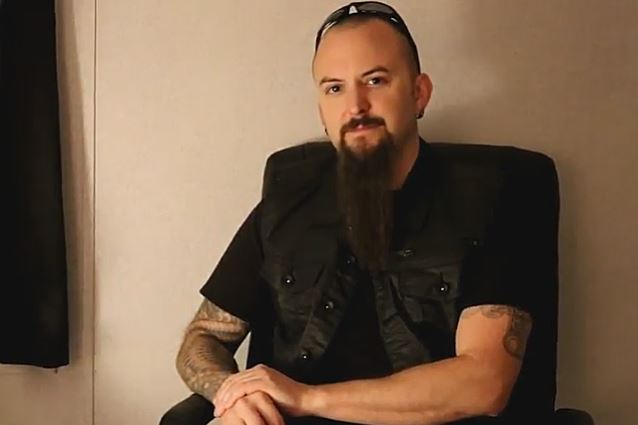 Brittney Patton of Arizona's The Eagle radio station conducted an interview with DISTURBED drummer Mike Wengren at last month's Aftershock festival in Sacramento, California. You can now watch the chat below.

Asked for his opinion on the state of the music industry in 2016, Wengren said: "Stylistically, I think there's some cool bands out there. One of my favorite newer bands — I guess they're not as new, but they're newer — is NOTHING MORE. We just got off the road with them; actually, the other night we finished a tour with those guys — CHEVELLE and NOTHING MORE was on that. I like those guys; they're really cool. [But] as far as the industry is concerned as a whole, I still think it's trying to figure itself out, with downloading and streaming and all that stuff, kind of like in a little bit of a state of limbo right now, but it seems to sort of be fixing itself, sort of reinventing itself, so, yeah, I think it's in a great place."

He continued: "I always hear about how people think that hard rock and heavy metal is dead, or it's gonna be dying soon, and then you come to a festival like this and… What are these people talking about? It's alive and well, and it's thriving right now."

Mike also talked about the current status of FIGHT OR FLIGHT, the project he launched during DISTURBED's hiatus with DISTURBED guitarist Dan Donegan, along with EVANS BLUE singer Dan Chandler, Sean Corcoran of RA on bass and Jeremy Jayson on guitar. He said: "It's been on hold since DISTURBED started working back again. Danny and I, we worked pretty hard on that, and we'd like to keep the door open for it, but we're a one-track-minded machine right now; it's all about DISTURBED, gas pedals all the way to the floor. When the day comes that this cycle is over and we decide to step away and go take a little bit of a break — it's not gonna be as long as the last hiatus… But, I mean, who knows? I really haven't thought about it. But, for me, the door is open, always."

As previously reported, DISTURBED will perform its cover version of SIMON & GARFUNKEL's "The Sound Of Silence" on the November 7 episode of Australia's "The X Factor".

The video for DISTURBED's version of "Silence", which was released in December 2015, has been seen more than 128 million times, a record number of views on YouTube for the group.