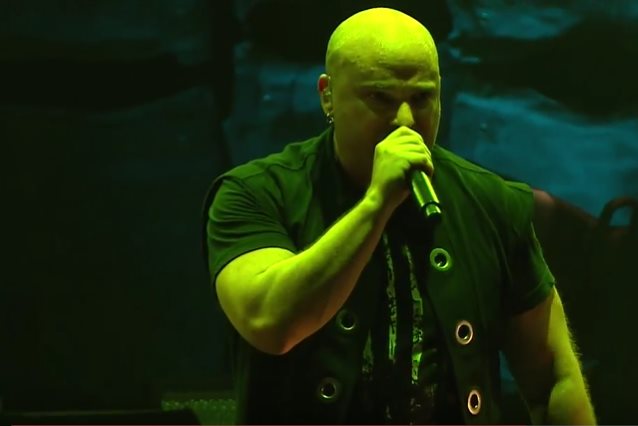 A stagehand working the AVENGED SEVENFOLD, DISTURBED and CHEVELLE show in Stuttgart, Germany last night (Monday, February 20) was killed after another crewman fell on top of him while trying to take down the front lighting truss. The 26-year-old crewman that fell on top of the 19-year-old is still alive and in critical condition. The accident occurred when the local crew was working to break down and load AVENGED SEVENFOLD's set.

DISTURBED has released the following statement regarding the incident: "The horror and heartbreak felt by everyone on the tour is beyond words.

"Our deepest condolences go out to that poor 19-year-old's family, and our best wishes for a speedy recovery go out to the surviving crew member that fell.

"We love and cherish all those dedicated crew members that are responsible for making the show happen day in and day out, and this horrible tragedy is almost too much to bear.

"We dedicate the rest of this tour to our fallen brothers. Life is precious and can end in an instant. Make every moment of yours count."

Jörg Klopfer, a spokesperson for the Schleyer-Halle venue where the concert was held, told Bild: "We have never had a fatal accident since the opening of the Schleyer-Halle in 1983. It is a terrible tragic event. We mourn with the family and friends of the young man."

It is not clear why the 26-year-old fell from a height of about 20 meters onto his colleague. Police officer Stephan Widmann said: "An expert will try to reconstruct the accident."

AVENGED SEVENFOLD, DISTURBED and CHEVELLE were scheduled to perform in Milan, Italy on Tuesday (February 21), but that show has been called off. The band's Italian concert promoter, Live Nation Italy, released a statement blaming the cancelation on the illness of AVENGED singer M. Shadows.