DISTURBED has been forced to cancel tonight's (Wednesday, July 24) concert at Brandt Centre in Regina, Saskatchewan, Canada due to illness.

The band, which is in the middle of the Canadian leg of its "Evolution" tour, announced the cancelation earlier today via social media. The group wrote: "Disturbed Ones — We regret to inform our fans that we will have to cancel tonight's show, Wednesday July 24 at Brandt Centre in Regina due to a vocal issue. At the recommendation of a doctor, [vocalist] David [Draiman] has been advised to rest and limit his vocal usage today to avoid any further damage."

The statement continued: "Tickets purchased online will be refunded automatically. Ticket holders that bought in person are eligible for a refund at their point of purchase."

DISTURBED was scheduled to play in Regina with support act POP EVIL.

The band is expected to perform on Friday (July 26) at Edmonton's Chaos AB festival.

DISTURBED's second North American leg of the "Evolution" tour kicked off on July 21 in Mankato, Minnesota, winding through the next three months before coming to a close on October 11 in St. Louis. Select shows on the tour feature either POP EVIL or IN THIS MOMENT as special guests. 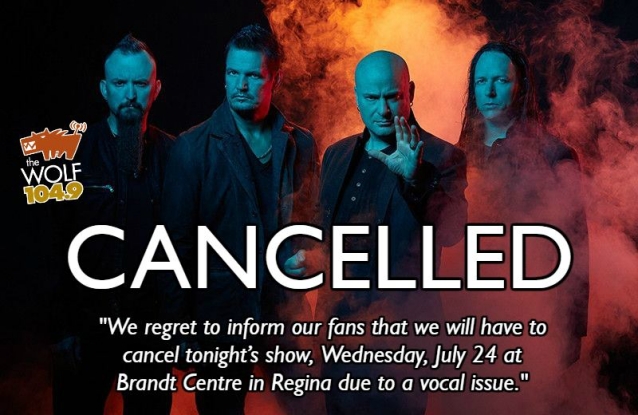