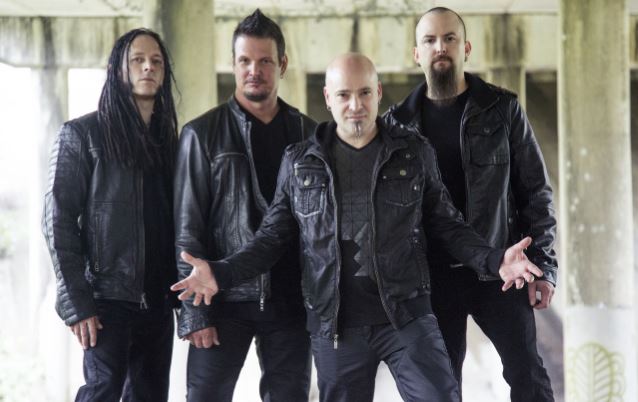 DISTURBED and CHEVELLE will team up for a short fall tour. Both bands hail from the Chicago area and CHEVELLE frontman Pete Loeffler said a new road trip together is long overdue. "It's been years since we've toured with these guys and they're from Chicago as well, so we've known them for years," he told Billboard. "We see eye to eye on a lot of different things and [DISTURBED singer] David Draiman has always been, he's been a friend over the years that I could call and ask about various tough questions, and he's actually done the same to me, he's called and asked my advice on things. And they've been a good band for us to tour with, and so we're gonna give it another shot and see how it goes."

DISTURBED and BREAKING BENJAMIN kicked off their co-headlining summer tour at the Lakeview Amphitheater in Syracuse, New York on July 9. The tour includes stops in more than 20 cities across North America.

DISTURBED recently issued a music video for the band's surprising cover of SIMON & GARFUNKEL's "The Sound Of Silence", which can be found on the quartet's latest album "Immortalized".

"Immortalized" became the band's fifth effort in a row to enter the chart at No. 1 — a feat shared only with METALLICA and DAVE MATTHEWS BAND.

CHEVELLE's new album, "The North Corridor", was released on July 8 via Sony Music. The CD was helmed by Joe Barresi, the American record engineer and producer who has previously worked with bands such as KYUSS, MELVINS, TOOL and QUEENS OF THE STONE AGE.