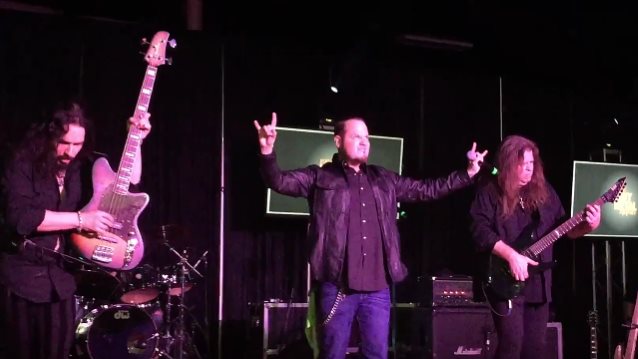 DIO DISCIPLES performed three new, original songs during the band's May 2016 appearance at the "Ride For Ronnie" motorcycle rally and concert for Ronnie James Dio Stand Up And Shout Cancer Fund in Encino, California.

Speaking to Hek82 at the "Ride For Ronnie" event, Owens stated about DIO DISCIPLES' plans to record and release original music : "Craig has really been instrumental in getting these songs written and trying to get it going on. And Joe and Oni [have] been doing a lot of shows with DIO DISCIPLES. They're really trying to push DIO DISCIPLES to put some music out — Wendy's been pushing it, and Craig's been pushing it — so these three we have here was three good ones we've already recorded. So it makes it special and it makes it even cooler that DIO DISCIPLES is gonna do our own thing."

In an interview with Myglobalmind, Goldy stated about the formation of DIO DISCIPLES: "You see, the band DIO was run like a family. So when your family member dies, the other members of the family that are left behind often try to do things to keep their loved one's memory alive. So that's where the DIO DISCIPLES came from. Wendy and Simon [Wright, sometime DIO DISCIPLES drummer] called me and said, 'We should really do something.' Because there were all these tributes going on for Ronnie; some of them were just trying to cash in on his passing and some of them were legitimate. However, we said, 'We are his family we should do something.' So that is where DIO DISCIPLES came from."

Goldy told Music Life Magazine that DIO DISCIPLES live performances are unique experiences. He said: "At every DIO DISCIPLES concert, there is a moment when the audience and band really connect. I am getting chills just talking about it. There are people in the audience looking up to the sky and singing at the top of their lungs with tears in their eyes, singing to Ronnie in heaven saying they miss him. It's just beautiful, and that's what the project was for."