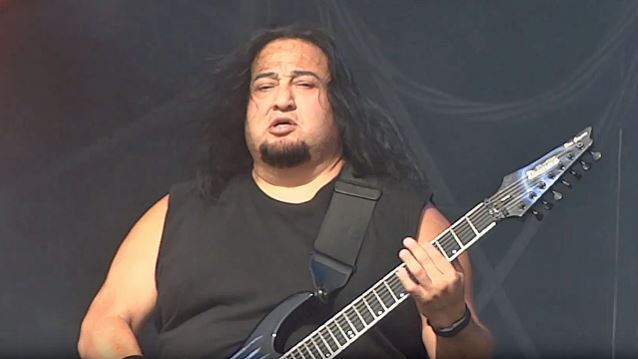 Dino Cazares says it was "really weird" playing with FEAR FACTORY while sitting down in a chair during the band's recent tour.

The guitarist injured his right foot after FEAR FACTORY's June 5 show in Melbourne, Australia. He saw a local doctor, who told him that he could not put any pressure on the foot for the following two weeks. As a result, Cazares sat in a chair for the last four concerts — the final two dates on the Australian tour, as well as the two South African shows.

Speaking to Hayley Leggs at this month's Bloodstock Open Air festival, Cazares stated about the experience (see video below): "What happened was I found out that I had a stress fracture in the top of my foot. So I had to sit down for four shows in South Africa and Australia. I wasn't gonna cancel the shows — not like some people I know.

"It was really weird. It took me half a set to really get into it and figure out how to play just sitting down.

"We can all play sitting down, but getting into it and doing a show, it's a little different vibe. I felt so out of place just trying to headbang. Like, 'Am I doing this right?'"

Fan-filmed video footage of FEAR FACTORY's June 11 peformance at The Assembly in Cape Town, South Africa can be seen below.