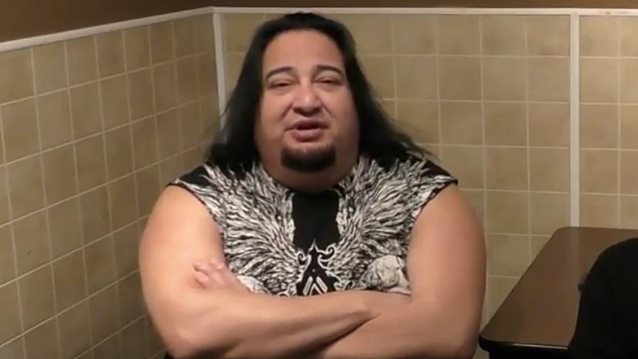 MusicWatchdog.com conducted an interview with FEAR FACTORY guitarist Dino Cazares on May 6 at the Marquee Theatre in Tempe, Arizona. You can now watch the chat below.

Speaking about how FEAR FACTORY developed its unique sound, Cazares said: "It's kind of funny. We figured out two different issues. When we first started FEAR FACTORY, we considered ourselves 'industrial grindcore.' We didn't exactly have all the technology that's involved today to really help us enhance our sound and create certain sound effects that we wanted to make. It wasn't until 'Demanufacture' [1995] where we brought in this producer, a guy named Rhys Fulber, this guy and a mixer named Greg Reely really helped us bring those elements out that we wanted to do. And also 'Demanufacture' was the first album that we actually wrote with a keyboard player as we were writing; we wrote a lot of parts with the keys [in mind]."

He continued: "It started on the first record, 'Soul Of A New Machine' [1992], where we really discovered that we stood out because, one, we weren't influenced by the typical stuff, and two, Burt's [C. Bell] vocal style really stood. And we didn't really develop it 'till 'Demanufacture' where we brought in the killer electronic elements, the guitars and the kick drums were syncopated on every part, and then Burt's vocal style… Burt got better. That was when I really knew that… wow, we're really on to a particular sound."

FEAR FACTORY has just completed a U.S. headlining tour on which it performed its classic second album, "Demanufacture", in its entirety.