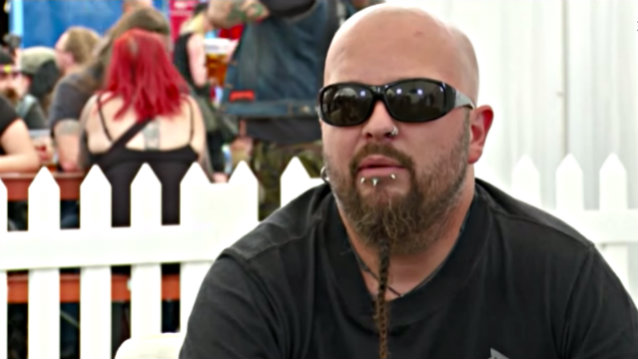 DIMMU BORGIR performed one very exclusive show on May 28, 2011 at the Oslo Spektrum in Norway with a special, never-to-be-repeated setlist with 53 members of KORK (the Norwegian Radio Orchestra) and 30 members of the Schola Cantorum choir, who were musical guests on the band's ninth studio album, "Abrahadabra". The concert, dubbed "Forces Of The Northern Night", was professionally filmed and was broadcast as part of a one-hour documentary in June 2011 on NRK (Norwegian Broadcasting Corporation), the Norwegian government-owned radio and television public broadcasting company and the largest media organization in Norway.

Speaking about the status of the planned "Forces Of The Northern Night" DVD release, Silenoz told Scuzz TV: "It should have been out the same year [that it was recorded], but it got put on hold. But that sounds really good. We remixed and remastered [it]. Everything is just sitting there and waiting [for release]. [It will] hopefully [be out] by the beginning of next year. Certain things have to fall into place, and it's not really up to us. But once we have that out, we can have a new release that we can promote and tour with, so I hope we can sort it out as soon as possible."

Regarding the experience of performing with an orchestra, Silenoz said: "It was, of course, really special, especially since it was in Oslo, and a lot of people traveled in for the show from all over the world. And everything went great on stage for once. When you have a hundred people on stage, the percentage of something going wrong is definitely there, but it was really, really good."