"The Invaluable Darkness", the three-disc package of 2 DVDs plus a bonus audio CD from Norwegian symphonic black metallers DIMMU BORGIR, entered the Music DVD chart in the band's home country at position No. 1. Indie Distrubution, which distributes DIMMU BORGIR releases in Norway, told Norway's music industry magazine Faro Journalen that it felt pretty comfortable that the DVD would reach the top of the chart. "Yes, we expected it," Espen Solheim Røhne, sales manager at Indie Distribution, admitted. "There are few bands out there that have the same following in Norway as DIMMU BORGIR, and their fans are always early in the shops to buy their product."

Røhne told Faro Journalen that the company shipped 2,500 copies of the DVD sets to Norwegian retailers. "We hope to reach 5,000 by Christmas," he said.

This marks the second time DIMMU BORGIR has landed at No. 1 in Norway. The band's most recent album, "In Sorte Diaboli", topped the chart upon its release in 2007.

"The Invaluable Darkness" sold 1,400 copies in the United States in its first week of release to debut at position No. 5 on the Top Music Videos chart.

On September 30 at the Steve Allen Theater in Los Angeles, fans of DIMMU BORGIRhad the unique opportunity to attend an exclusive, advanced screening of footage from "The Invaluable Darkness". There was also a question-and-answer session with special guest Silenoz hosted by Brendon Small of DETHKLOK and "Metalocalypse" where fans were able to ask questions.

Over 30 minutes of footage from this event, as well as a video interview Nuclear Blast Records conducted the next morning with Silenoz at the label's USA office can be viewed below. 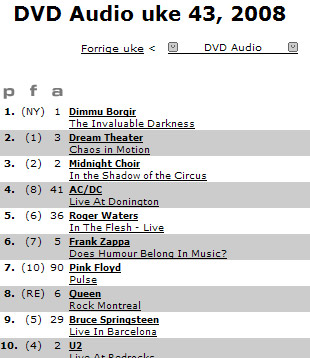