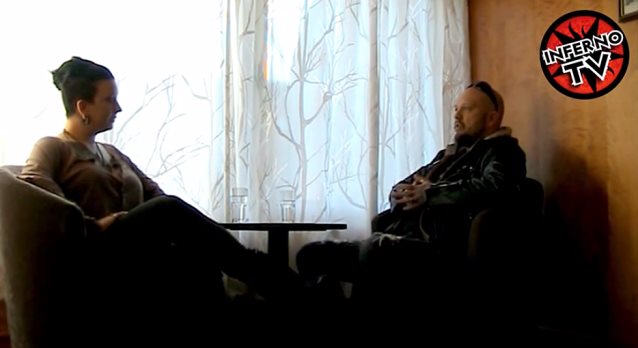 Guitarist Sven Atle Kopperud (a.k.a. Silenoz) of Norwegian symphonic black metallers DIMMU BORGIR and the death metal supergroup INSIDIOUS DISEASE was interviewed by Inferno TV at this year's Inferno metal festival, which was held April 16-19 in Oslo, Norway. You can now watch the chat below.

Asked about his upcoming musical projects, Silenoz said: "Of course we're always writing music for the new DIMMU album. And I have written most of the music, finished, for the next INSIDIOUS DISEASE album. So there's a lot of stuff going on. Time flies by, and before you know it, it's, like, four years since we released the last DIMMU album. Usually we take a couple of years between each release, but now it's [taken longer and] two more [years have gone by]. But we haven't rushed, really, because we'd rather take our time and make an album that we can fully appreciate and stand behind."

DIMMU BORGIR's follow-up to 2010's "Abrahadabra" is tentatively due in early 2015 via Nuclear Blast Records.