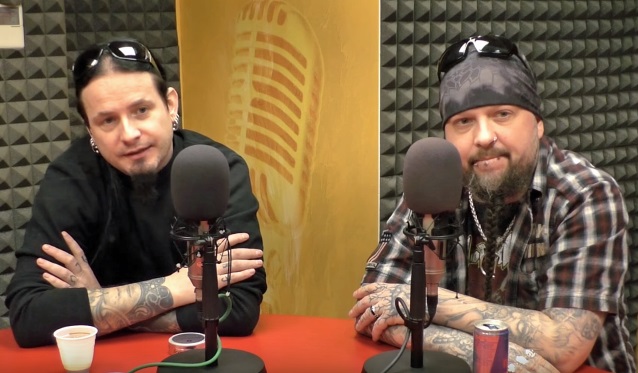 Barbara Caserta of Italy's Linea Rock recently conducted an interview with vocalist Shagrath and guitarist Silenoz of Norwegian black metallers DIMMU BORGIR. You can now watch the chat below. A couple of excerpts follow (transcribed by BLABBERMOUTH.NET).

On DIMMU BORGIR's musical evolution leading up to the release of the band's new album, "Eonian":

Silenoz: "I think if you go into the layers of this album, if you listen to it and live with it for a while, you will notice that there's a lot of links back to the past of the band, and also from the genre that we came from."

Silenoz: "It needs your patience, and maybe for some people, they need eight years to get into it."

Shagrath: "It's important for us, every time that we are in the creative process and we release an album, we don't want to be too repetitive. To grow is important as an artist, and we've never been afraid of exploring new territories, new sounds. We don't work within these boundaries of so-called primitive black metal — we are quite different from any other bands — and I'm really proud of that. You lose some and you gain some people. Everyone has their own favorite era of the band — some people like just the first two albums, some people just like 'Puritanical [Euphoric Misanthropia]' [2001] and 'Death Cult [Armageddon]' [2003], and they all have different opinions — but looking back at it, it makes me proud that you can see that the band has grown a lot since 1993, and that's the way I want to make music: to grow, not to just play in a safe zone and do a repetition of yourself. It wouldn't make sense. Some people like that; some people hate that. And if you don't like it, just listen to something else. It's quite simple."

On DIMMU BORGIR's numerous lineup changes over the years:

Silenoz: "It's very challenging at points in our career. We have been the ones that have been soldiering through the whole time. Yeah, it's not for everybody. It's not easy to combine this with family life and other interests. Where other people, or previous members, have maybe gone to the movies with their girlfriends, we have gone to the rehearsal place. And that's the main difference."

Shagrath: "But also, the musical side is just a small percentage of it. Because we are a live band and we perform shows, which means we also spend a lot of time together while we are on tour; we're living close to each other. So being a good musician is just a small percentage. You have to get along with your traveling family on the road, so to speak, and respect each other and stuff like that, and that can be challenging, after years and years of touring."

Silenoz: "It's not something you figure out the first week of rehearsal with a new person in the band; that's something that you get to know after maybe years."

Shagrath: "We never liked to change members either, but sometimes it has been a necessity for us to continue this road further. So we do it for a reason, and I don't think everybody can understand that."

"Eonian" will be released on May 4 via Nuclear Blast. The disc contains 10 new tracks, produced by the band itself and engineered by Jens Bogren.

The songwriting core of DIMMU BORGIR still consists of Shagrath and guitarists Silenoz and Galder. They are joined in the band's current lineup by drummer Daray and keyboardist Gerlioz.