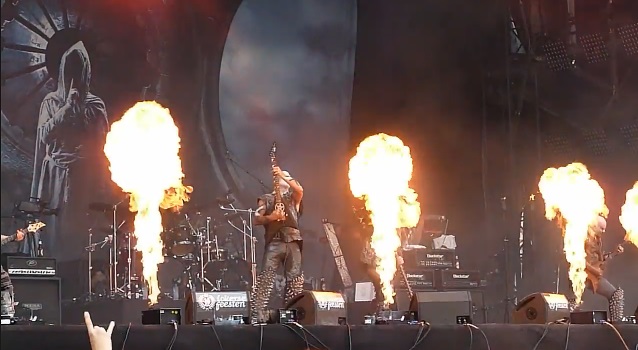 Fan-filmed video footage of DIMMU BORGIR's August 3 performance at the Lokerse Feesten in Lokeren, Belgium can be seen below.

Asked about the progress of the songwriting sessions for DIMMU BORGIR's follow-up to 2010's "Abrahadabra", guitarist Sven Atle Kopperud (a.k.a. Silenoz) told Kaaos TV at the end of June: "We are still just writing individually and sometimes together. But we are not really far into the process. We just take it as it comes and we always make it when it's the right time. So I wish we could have had the album ready now, but we don't, so we just have to accept it the way it is and make the best out of it. But I think when we come with a new album, it's gonna be something that we can stand behind and which represents the band where we are at the moment."

He continued: "We always usually take two to three years between each release. Now it's been already four years. But it will take the time it needs to be great… I think it's also important not to rest on your laurels too long. I think it is gonna be what it is. If it takes another two years, then so be it, but hopefully not. [Laughs]

"It would be good to have [the album] done by this time next year, and have everything done by that time, but we'll see what happens. A lot of things have to happen before we can go the whole way."

Regarding the direction of the new material, Silenoz said: "I think what we've done so far is kind of primal sounding, maybe more simple. But that's what I felt with the last album too, because that's what you feel when you're doing in the beginning of a process. So it's hard to say. But maybe more aggressive and more simple. We'll see. It can all change tomorrow. [Laughs]"