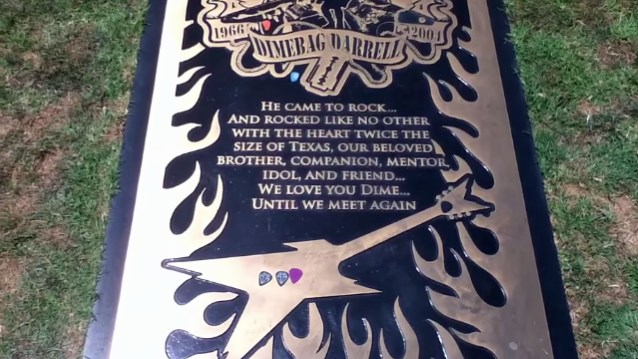 **UPDATE** The members of the Fort Wayne, Indiana death/thrash/black metal band NUCLEAR HELLFROST have released the following statement regarding allegations that they were involved in the desecration of Dimebag's grave:

"The posts about us and to us are a complete surprise to us. Anything having to do with grave desecration was entirely a hoax put on by our former lead singer completely disconnected from the other members of the band.

"If you see Dimebag's grave, you can see there is nothing carved into his grave, the only thing that exists is a photo of a piece of paper posted by the former member.

"We are strongly against any sort of homophobia, racism, or outright disrespect for a human being.

"We have nothing but the utmost respect for Dimebag, and this is a misguided political publicity stunt that we were dragged into by a former member with an awful sense of humor.

"NUCLEAR HELLFROST as a band would like to apologize on this former member's behalf to not only Dimebag's fans, but most importantly his family.

"Again, the members of NUCLEAR HELLFROST had absolutely ZERO actual involvement in any of the alleged actions described by our former singer. Again, nothing but respect to Dimebag as a human being and condolences to his family. These are fabricated and contrived allegations on the Internet that never happened in real life."

According to a post on PANTERA's Facebook page (see below), authorities have been notified after members of an up-and-coming metal band allegedly used an Instagram account to boast about defacing late PANTERA guitarist "Dimebag" Darrell Abbott's grave. The since-removed Instagram post (the Instagram account has been deleted as well) showed a photo of the grave with the following caption: "i HATE pantera...with a passion. and so does the rest of my band. so on tour going throug texas we paid douchebag darrell a visit, we spit on his grave, stole a pair of cowboy boots, and i wrote 'FAG' on his grave... i'm not a homophobe but i hope all panturrrra fans see this and shit themselves with anger....FUCK DIMEBAG, buncha racist hillbillies"

Unsurprisingly, many of the PANTERA fans have since caught wind of the posting and have since used the Internet to voice their displeasure over the grave defacement. The PANTERA camp has also commented the despicable actions of the individuals in question, writing on Facebook: "We are absolutely disgusted by this! We ask that all of you please show Dime and his grave the respect he deserves. This conduct will not be tolerated and the authorities have been notified."

After it was reported a few years ago that Dimebag's grave at the Moore Memorial Gardens Cemetery in Arlington, Texas was vandalized, Dimebag's brother, former PANTERA and current HELLYEAH drummer Vinnie Paul Abbott, was asked by Artisan News if the person responsible for causing the damage had ever been apprehended. "Nah, nah" he replied. "But it's just a real disrespectful thing. I don't understand why somebody would wanna scratch their name in somebody's tombstone or anything. But fans are rabid, man; they do unheard-of things. I just wish they would respect him and let him rest in peace and just leave it at that."

"Dimebag" Darrell Abbott was co-founder and lead guitarist for PANTERA. When PANTERA broke up in 2003, Dimebag and his brother Vinnie Paul formed DAMAGEPLAN. On December 8, 2004, while performing with DAMAGEPLAN at the Alrosa Villa in Columbus, Ohio, Dimebag was shot and killed onstage by Nathan Gale. He was 38 years old.