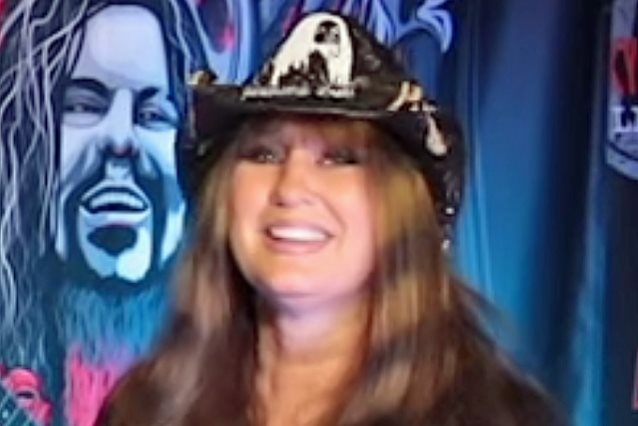 Late PANTERA guitarist "Dimebag" Darrell Abbott's longtime girlfriend Rita Haney was interviewed by Heavy New York at the Ride For Dime charity event and concert on August 26 at the Starland Ballroom in Sayreville, New Jersey. You can now listen to the chat below.

Speaking about Dimebag's evolution as a guitarist, Rita said: "It's crazy. I remember the first time when we met, we were eight years old and we were in third grade. And even then, before he even knew he was going to play guitar, and we had just discovered KISS, you still, when you met him, you knew there was something special about him. 'Cause he was still that kid that was funny. Even though I pushed him off his bicycle when I first met him, we just became friends — he was just that person that you wanted to protect and shield and take care of. I knew it then. There was just something… I mean, I probably didn't know it then, but I knew there was something. Until later on, I'd look back and go, 'Yeah, he had it then.' He was just born with it — just special. But, yeah, I would say watching him do Big Wheel Skateland and then, of course, he played the talent show at Junior High [school], and just coming into his own was just amazing. He was just that guy that he stood in front of that mirror, even before he played — like Vince [Vinnie Paul Abbott, Dimebag's brother and former PANTERA drummer] used to say — and just pose with the guitar, and go, 'You're ever gonna learn to play that thing?' But he did. He was focused. He was the most driven person I've ever met and that I've ever known."

Haney in 2011 called on Vinnie Paul and former PANTERA singer Philip Anselmo to settle their differences in honor of Dimebag, who was shot and killed by a crazed gunman while performing with DAMAGEPLAN at a Columbus, Ohio rock club in December 2004.

Vinnie and Anselmo have not spoken since PANTERA split in 2003. But the relationship got even more acrimonious when Vinnie indirectly blamed Philip for Dimebag's death, suggesting that some remarks the vocalist had made about Dimebag in print just weeks earlier might have incited Dimebag's killer.

In former PANTERA bassist Rex Brown's memoir, "Official Truth, 101 Proof: The Inside Story Of Pantera", Haney said: "My line has softened over the years since Darrell's death, probably because I feel an element of forgiveness and a desire for everybody to get along. No matter what ever happened, nobody did this to Darrell. I mean, they — Rex and Philip — didn't. The person who did it did it, and no matter what reason the killer — if he was still alive today — could give to justify that, it wouldn't change anything. But when you go through something like this, you want to lay blame somewhere. Obviously I had resentment to Rex and Philip because I had to watch Darrell trying to save his band. I wanted to fix it for him."