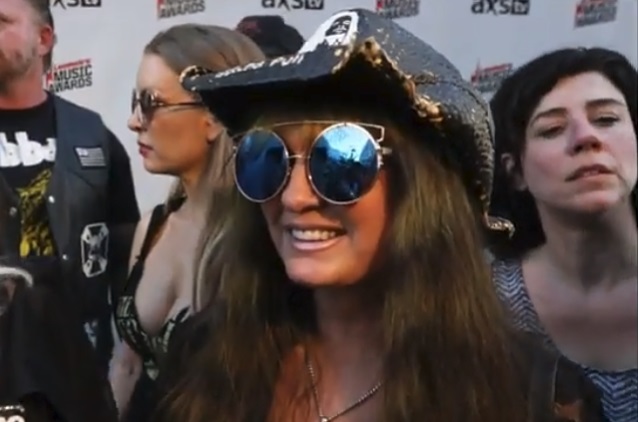 "Dimebag" Darrell Abbott's longtime girlfriend Rita Haney says that she "lost some friends" after the incident nearly two years ago when Philip Anselmo gave the right-arm salute and yelled a white-supremacist slogan at a California concert.

At a January 2016 "Dimebash" event at the Lucky Strike Live in Hollywood in honor of the late PANTERA guitarist, Anselmo performed the PANTERA classic "Walk". As he left the stage, he was caught on video making a Nazi-style salute and appearing to say "white power."

Although Anselmo initially commented on the video to claim that he was "joking," he later apologized for what he did, saying that "it was uncalled for" and asking fans to give him "another chance."

During a brand new interview with "The MetalSucks Podcast", Haney, who helped organize "Dimebash", admitted that she "hated" the fact that the Anselmo controversy overshadowed the event, but she commended the former PANTERA frontman for stepping up and accepting responsibility for his actions.

"That's a tough pair of shoes to wear, to have to better yourself from a situation like that," Rita said. "But I've got faith in Philip. I've seen that man rise from worse ashes. And he's doing really well. The last time I saw him, he'd lost a lot of weight and he was really focused, and I'm pretty proud he's taken those steps."

While acknowledging the fact that "more people know the name 'Dimebash' now" because of what happened, she expressed optimism that the incident wouldn't jeopardize the benefit concert's future as a recurring event.

"Well, like Gene Simmons used to say back in the day, no press is bad press," she said, before adding more seriously. "I think a lot of people, especially in today's world, know… People can separate a great event from a mistake. Yeah, of course everybody had a really rough time with it at first, but time has passed, and, like I said, people realize… And it does take time to see someone taking a step in the right direction to better themselves, and that's happened, and people see that. So, yeah, I don't feel that we'll have a problem with anything."

In the days following the incident, MACHINE HEAD's Robb Flynn — who played PANTERA songs with Anselmo at "Dimebash" — released an eleven-minute response video in which he denounced Anselmo as a "big bully" and a racist. He concluded by saying that he would never play another PANTERA song again.

Rita has taken issue with the way Flynn responded to the incident, saying that "[Robb] was supposed to be a close friend and a brother, and I just felt that that was really handled very poorly. Being friends and [having] respect for each other, I just didn't understand why he didn't bring that… be a man — bring that to [Philip] face to face, like he should have… It should have a face-to-face [exchange] immediately, it should have been addressed. But I wouldn't wanna walk in [Flynn's] shoes either, 'cause that face-to-face [between him and Philip] will happen one day — it's inevitable. So hell no, I wouldn't wanna be in his shoes. There's just no telling which way that might go."

Haney went on to say that she "lost some friends through that whole thing. But I can only hope that both have learned from the mistake and something good can come out of it for both of them," she added.

Rita also addressed Anselmo's claim that he yelled "white power" and threw the Nazi salute because he was joking about drinking white wine backstage and because he was reacting to the audience members up front who he says were taunting him.

"I know that was the first event that Philip had done for Dime, and I know that was really emotional for him, 'cause it was pretty heavy for us both," she said. "At first, when we were in the back, [we were] talking and discussing some things that were personal to both of us that we had not really had a chance to do. And we both teared up, we both were crying, and those are things that people don't know that were going on. Of course, that just led to too much hard liquor too quick, and it got out of hand.

"I didn't actually see the person who was heckling the stage and yelling stuff at the time," she admitted. "I had heard earlier in the night that that same group of individuals and person had done the same thing to Robb Flynn when he was telling a story on stage, and Robb had told 'em to shut up. But, yeah, I really couldn't tell you."

Former PANTERA drummer Vinnie Paul Abbott, who hasn't spoken to Anselmo since the band's split in 2003, was dismissive when asked for a comment on the singer's white-power salute. "I can't speak for him," Vinnie said in a 2016 interview. "He's done a lot of things that tarnish the image of what PANTERA was back then and what it stood for and what it was all about. And it's sad."