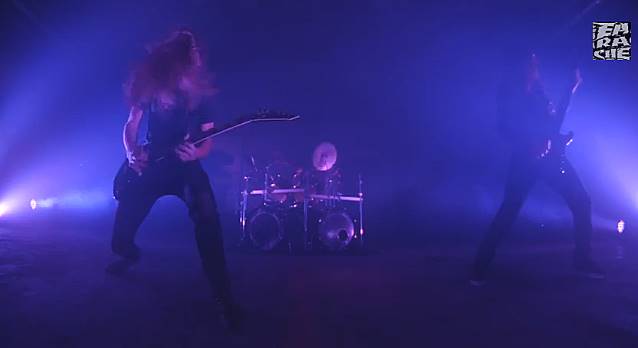 Chicago's DIAMOND PLATE recently teamed up with director Lester Cohn (MASTODON, NEIL YOUNG, CHEVELLE, TAKING BACK SUNDAY) to shoot a video for the song "Dance With Reality" off the band's sophomore album, "Pulse".

Says the group: "Our goal with this music video was to capture the band's live energy in a cinematic way while giving the viewer more than just a video of us playing live.

"Thanks to our director Lester, our cinematographer Andrew, all of the cast and crew, and the 1966 Chevelle for being a badass motherfucker."

DIAMOND PLATE is currently on tour with DEATH ANGEL, 3 INCHES OF BLOOD, BATTLECROSS and REVOCATION.

"Pulse" was released on August 20 in the USA via Century Media/Earache and on digital formats in Europe on August 19. The follow-up to 2011's "Generation Why?" was recorded with producer Neil Kernon (JUDAS PRIEST, NEVERMORE, DEICIDE, 3 INCHES OF BLOOD) at Studio Chicago.

Commented DIAMOND PLATE: "During the months of recording, the album took on a life of its own. Our goal was to capture the energy of a live band, and working with Neil gave us the freedom to create the music we've always wanted to play.

"A straightforward explanation of the title 'Pulse' is that it represents music, or life, in its purest form. The real meaning behind the album can only be discovered by the person using his/her ears."