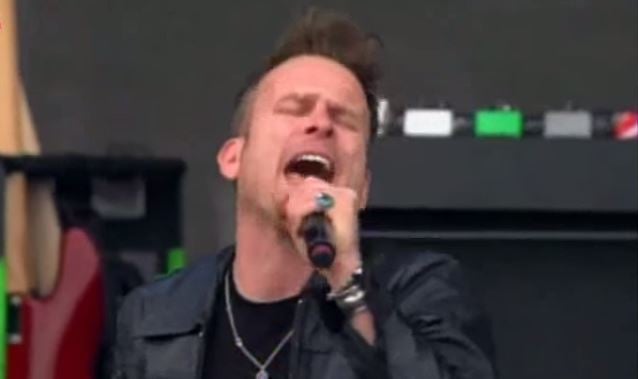 Vocalist Nick Tart has quit NWOBHM (New Wave Of British Heavy Metal) legends DIAMOND HEAD, admitting that he made it difficult to work with the rest of the band by "moving to the other side of the world" to Brisbane, Australia.

He said in a statement: "After 11 years of being the singer for DIAMOND HEAD, I now feel it's time for me to move on.

"As most are aware, [DIAMOND HEAD] have already started the October tour with a replacement singer [Danish vocalist Rasmus Bom Andersen, who lives in London] and I wish them nothing but the very best.

"I haven't heard the new guy yet, but I'm sure he will be great; Brian [Tatler, guitar] has good quality control over DIAMOND HEAD and I don't believe he would continue touring unless he had found a singer who could pull it off. They are a very powerful band to front, so the best of luck to him. No doubt I will be snooping into YouTube to see what they sound like.

"I was hoping to pen a third album [with DIAMOND HEAD], but making new music with the band became limited; Brian mentioned he had no interest in making a new album, he didn't feel the urge, which I can totally understand. He's been doing it for a long time, but if there is no urge to make a new album, then an album doesn't belong. I made things even more difficult by moving to the other side of the world.

"After living in Brisbane for nearly 6 years now, I've been very fortunate to still be able to fly to the UK and U.S. for tours, thanks to hard work and determination of Karl Wilcox, our drummer, without him there's quite a lot that wouldn't have been possible for DIAMOND HEAD.

"When DIAMOND HEAD get offered work — festivals, for example — they should be in a position to say yes, without worrying about all the hassle it will take to get me involved.

"I'm very proud of the two albums I have written and recorded with DIAMOND HEAD and the touring we have done was way beyond my expectations, especially performing at Knebworth with METALLICA.

"I have had some fantastic times.

"The guys in DIAMOND HEAD are so grounded which made the tours such a joyful ride, and we have had some laughs.

"I now have my own band here in Brisbane; it's taken me a long time to find someone to connect with musically, but I'm now writing new material and things are shaping up nicely. I'm getting quite excited, so I now need to move forward.

"Love and thanks to those DIAMOND HEAD fans that accepted and encouraged me when I first joined the band and have followed us ever since; you know who you are.

Tart joined DIAMOND HEAD in 2004 as a replacement for Sean Harris.

DIAMOND HEAD was a big influence on METALLICA, which recorded a cover version of the DIAMOND HEAD song "Am I Evil?" in 1984 and released it as a B-side to their "Creeping Death" single (and later on their "Garage, Inc." album).