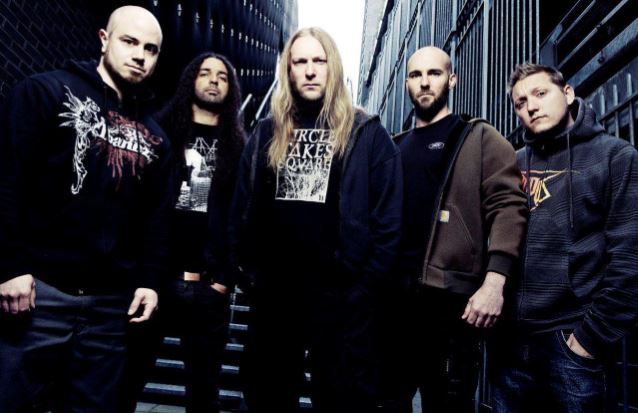 The song "Affect Gravity", taken from "Intermination", can be streamed using the SoundCloud widget below.

Comments DEW-SCENTED singer Leif Jensen: "'Affect Gravity' is probably a bit of an unusual track for DEW-SCENTED and not only because of the talkbox at the beginning. It's got quite some melodic riffing and a very dark twist to things, but it's always dynamic and heavy. It turned out to be one of my personal fave-tracks on the album and I look forward to playing it live too!"

Adds drummer Koen Herfst: "I tried to really emphasize the aggressiveness of the song by playing pretty much straight forward and really loud in the parts that ask for it. Love the way the toms turned out in the mix which makes the parts that lead into the verses really heavy. Halfway the song I do a groove inspired by Derek Roddy, which is basically a blast beat on my second snare combined with a back beat on my main snare. After that, I do a really heavy and basic groove which breaks things open in the guitar solo."

All formats of "Intermination" include a cover of REPULSION's "Radiation Sickness", while the digital edition and the limited-edition gatefold vinyl (dark green and 180-gram black variants) will include two bonus tracks, "Those Who Will Not See" and "Survival Reaction" (SOLSTICE cover).

Pre-order information, including exclusive t-shirt bundles, can be found at this location.

Bonus tracks (only available on vinyl and digital versions)

14. Those Who Will Not See
15. Survival Reaction (SOLSTICE cover)

Another song, "On A Collision Course", can be streamed below.

DEW-SCENTED will embark on a European tour dubbed "Thrash Mercenaries" in October with ANGELUS APATRIDA from Spain and NO RETURN from France. Additionally, the band has just been announced to support CAVALERA CONSPIRACY as well as EXODUS on select dates. 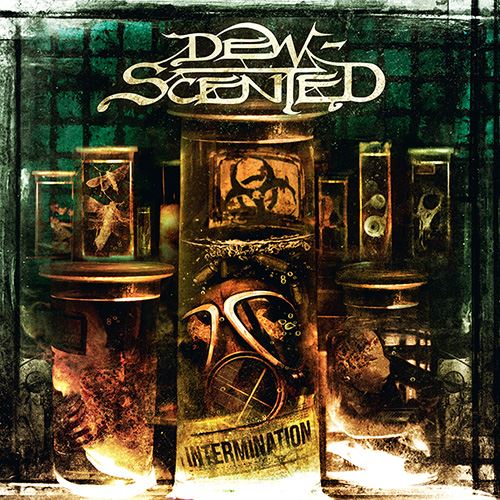