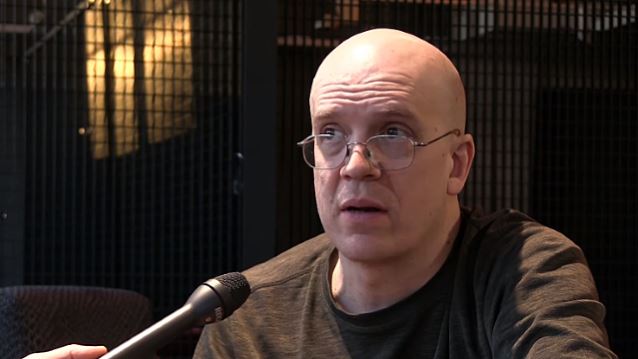 On March 21, Finland's Kaaos TV conducted an interview with Canadian multi-instrumentalist, singer, songwriter and producer Devin Townsend at Rytmikorjaamo in Seinäjoki, Finland. You can now watch the chat below.

Asked how it feels to be honored in the "Metal/Hard Music Album Of The Year" category at this year's Juno Awards (the Canadian equivalent of the Grammy Awards), Devin said: "Well, I think it's a popular thing to say, that awards don't mean anything to you, but they do; it means something to me. It meant a whole lot to me.

"Los Angeles is shit [for writing inspiration]. So when I'm in countries that have nature, I feel very creatively charged. And Canada is very similar to the grography [of Northern Europe and countries like] Sweden, Finland and Norway, and so I relate.

"For some reason, when I was younger… Maybe it's because I moved to America quickly for the Steve Vai thing, or toured extensively outside of Canada, but it's been very difficult for me to get any momentum in Canada. The industry there… I've always kind of wanted to be a part of it, but it's never happened, for whatever reason. So the Juno thing is like the first time where I've had, sort of, an invitation to the party. And it's been three years that we were nominated; we were nominated for 'Deconstruction', 'Epicloud' and now 'Z2'. And so, to get it, you know… I was proud of it. I was really proud of it. I think it's really nice. It was a good thing for me."

Townsend also spoke about the next project he is working on which will take up much of the remainder of the year. He said: "I'm writing a symphony, and I'm gonna record it in Belgium, in Surround Sound, with a visual counterpart. And it's gonna be a hybrid. It's gonna have a lot of instruments that are not typical for orchestral stuff. And it's gonna be a combination of everything. 'Cause typically in the past, I would do STRAPPING YOUNG LAD, or I'd do 'Ki', or 'Ghost', or something. But I wanna put it together. I wanna have something that goes between the extremes of beautiful — like really, really sublime and beautiful — to just total chaos, like hellish apocalypse. And I'd like to have a point to it that isn't a story. I'd like to have it to do with human things, emotions that I currently struggle with, 'cause I don't find myself emotionally very intelligent. So the things that happened in my life that forced me to learn it are also inspiring — loss or sadness or happiness or embarrassment, or any of these things. And so my plan is to make something that is massive in scope, but is not bombast totally."

He continued: "The bottom line is music, for me, is an exhaust port for life, and if I have a chaotic year, then I'm gonna write a chaotic record, and that's what happened with 'Ziltoid', with 'Z2'. So asking the people close to me to lay off the work will allow me, in my mind, to not write something that's chaos, but have something where the chaos is something that I can manage and control and turn into dynamic, as opposed to just an onslaught."