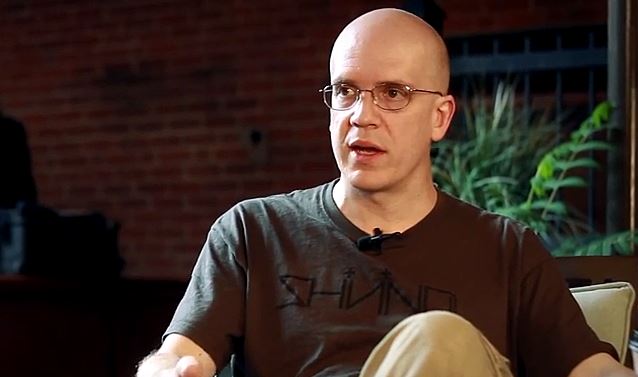 David E. Gehlke of DeadRhetoric.com recently conducted an interview with Canadian multi-instrumentalist/producer Devin Townsend. A few excerpts from the chat follow below.

DeadRhetoric.com: I saw a quote from you in regard to "The Retinal Circus": "It's a clusterfuck on stage." Can you elaborate?

Townsend: I probably just like swearing — it makes me feel good. [laughs] In my head, everything I do that has a concept, which is 80%, appears a lot more streamlined in my mind's eye than when we try to articulate it on stage when we have no money and no time. So, "The Retinal Circus" is yet another example of me being overambitious and underfunded, as someone close to me commented on the state of my career. Once you've spent some time with the show — if you choose to do so, or you turn it off, it makes a great deal of sense. Ultimately, by the end of the end of the show, it has a point that it makes, that the clusterfuck nature is essential. It has to be there. But really at first look, I had a bunch of friends – I spent a lot of time on the video and the audio — I brought the DVD on the tour bus I was on at the time and I played for a band we were out with at the time and a bunch of guys that were involved with it, I put it on and cranked it up, and looked around the front lounge and everybody's face was like, "What the fuck is this?" I remember thinking at that point, "If you're not deeply invested in the creative elements of it and why it is the way it is, I can totally see why people would view it as chaos." When I had described it as being a clusterfuck on stage, it was more of me buffering people that until you do choose get that deep into it, it's pretty over the top.

DeadRhetoric.com: Jed [Simon] joined you for "Love" and "Detox". As you said, there's always the cloud of STRAPPING YOUNG LAD hanging over you, but you confronted it by having Jed onstage with you. How cool was that?

Townsend: First off, thank you for recognizing that, because that's exactly what it is. Ultimately, I'm going to do what I want to do, and that's the bottom line. The more that people demand I do something, the less I want to do what they demand me to do. When I was a kid or first in a relationship with my wife, she would comment, "Whatever it is I want you to do, I make sure I don't tell you to do it." I'm aware of it, which is a good first step. It's the truth — I hate being told what to do and I won't be told what to do. So the more people go on with these self-serving demands about STRAPPING YOUNG LAD, I'm like, "Look, NO!" Not now, more than ever before, because I keep being bugged about it. For me, having Jed there and playing STRAPPING was important because I didn't have the opportunity to really — other than being "Fuck you, quit talking to me about STRAPPING" — I've not had the ability as a musician or as a person to reflect on, "How do you feel about STRAPPING?" Regardless of what anybody feels or their misinterpretation of it, how do you feel about it? And how do I feel about it? I'm totally proud of it; it's a huge part of my life. It's something I have an immense emotional connection to, and respect for, but in the same way that what I'm doing right now, which is "Ziltoid" or "Casualties", STRAPPING is what I was doing then. I find that I can totally sympathize why people would want it back, but my frustrations lay with any band, GUNS N' ROSES, GODFLESH with "Streetcleaner", anything, I don't understand the process people go through in terms of assuming that if the band was still active right now, they'd be like the period that was of emotional significance to them. I don't understand and I'll say that straight-up. But the more I look into it, I realize that it's everywhere. I read something about Ihsahn and about EMPEROR getting back together, and in the interview, he gave a very explicit and perfectly logical explanation as to why EMPEROR wouldn't be the same now as it was then. I thought, "Okay, that makes perfect sense." But the comments are unequivocally, "No, I don't agree — you're wrong. EMPEROR would be perfect if they came out again." My reaction is just confusion. That being said, because it's a reality and you can't escape it, I have no problem explaining myself.

DeadRhetoric.com: To back that up, you played a STRAPPING song in Chile and posted a message on Twitter after the show essentially apologizing for it. What happened there?

Townsend: The crowd loved it, but for me, I don't know how I feel about it. And STRAPPING YOUNG LAD, as much as I wrote 80% of the music, it wasn't just me. It was Gene [Hoglan], Jed, and Byron [Stroud]. For example, I bought the new BLACK SABBATH record and I can't listen to it because the drums are distracting.

DeadRhetoric.com: Because it's not Bill Ward playing.

Townsend: It's not Bill Ward. It has nothing to do with the drums being not-BLACK SABBATH or poor performance or poorly recorded, or anything — it's just that I can't shake it's not Bill Ward, so it's not BLACK SABBATH to me. I know that it's a naïve way of looking at it, but I feel the same way about anything I do. Unless it's completely me, I don't want to be that guy, I don't want to be that guy that goes up and plays STRAPPING YOUNG LAD songs. I wrote most of the stuff, but I didn't feel comfortable. In fact, I felt that until I worked on my relationship with those guys — and not that my relationship is bad, it's healthy — but until I come to terms with it and until people stop bugging me, I'm not going to have any perspective on the band other than frustration, other than odd memories. I just felt that it's not what I wanted to be doing right now.