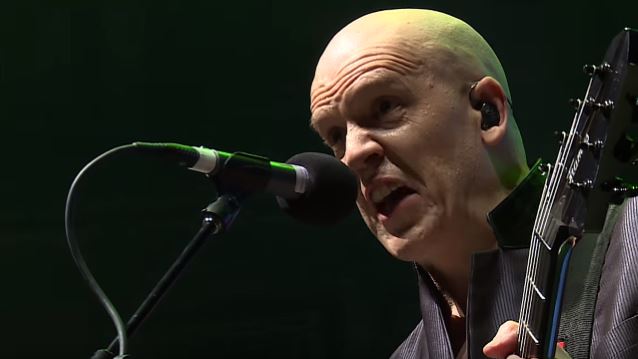 Kyle McGinn of DeadRhetoric.com recently conducted an interview with Canadian multi-instrumentalist, singer, songwriter and producer Devin Townsend. A few excerpts from the chat follow below.

DeadRhetoric.com: I saw somewhere you had finished the outline for your symphony project. What is your vision for this project?

Townsend: I've been told I shouldn't start thinking about it until December [2016], but between you and me and whoever is reading this, I've got so much of it written already. I haven't taken the step of allowing it to become an actual form, but there's certainly a trajectory and an aesthetic and a theme. There is an objective in terms of what it is that I want people to feel once the music on the album is finished. So you put all those things together and currently in my mind, I call it "The Moth." It's this big, desperate jumble of information so far. If someone told me tomorrow to start thinking about it, I'd have a much clearer answer about it, but currently it's just a bag of stuff.

DeadRhetoric.com: I know you are constantly busy with things. You have a book coming on the way too. How much progress has been made at this point?

Devin Townsend: Oh, it's done. Here's another way to look at it. Typically when I do interviews with people, one of the things I hear a lot is that I'm constantly busy and going, going, and going, but really I just think I'm efficient. I have a lot of time when I don't do anything! I go for a walk, or go get ice cream, or go do yoga. I take weekends off. I'm not balls to the wall. When it's time for me to work, then I'm balls to the wall. But deadlines are good for me, and I think my process after 25 years is pretty efficient. I can get a lot of stuff done in very little time if I put my mind to it. If you look at my work as being a 9-to-5 job, where I start working at 9 and quit at 5, I get stuff done every day and it just sort of builds up [over time]. Doing the book, for example, maybe I spend three hours a day on it and then over the course of six months, it's done! It's not like I'm beating my head against the wall 15 hours a day trying to get this thing done. I just do little bits at a time and eventually it's done. I do the same thing with all these projects. We were just talking about the symphony. By the time it comes for me to really get started in December, that's like a year from now! I've already got most of it written in my mind, so when that time comes… I've already started the artwork now, for example. I know where I'm going to record it, I know who is going to produce it, I know which symphony I am going to use, I know I'm going to mix it — all these things are kind of done and I'm working on other projects now. So when I finally do get to the symphony, the amount of effort that will go into actualizing it is basically going to be delegating tasks to people and overseeing it in a lot of ways. So the appearance may be that I'm cooking things up 15 hours a day in some science lab, but the reality is that I'm going to the mall to go Christmas shopping tonight. [Laughs]

DeadRhetoric.com: That's a pretty interesting way of putting it. Is there a way that you keep yourself being efficient then?

Townsend: Yeah, I don't go to parties and I don't drink or do drugs. It's the easiest thing in the world. Just have a fun-free lifestyle and then you get tons of shit done! [Laughs]

DeadRhetoric.com: Well, there you go! [Laughs]

Townsend: I've been nine years sober. I don't go to shows, I don't like going to parties, and I rarely hang out with people other than work stuff, and I think about my work all the time. I really enjoy it. I enjoy gear, I enjoy the creative process, I enjoy the technical process, and I sort of absent-mindedly think about it all the time. So by the time I get to it, it's already sorted out in my head so it's a matter of just doing it. Really, I don't do much other than just normal life stuff and absent-mindedly picking away at my process. It works great.

DeadRhetoric.com: In a recent interview I read, you were talking about what you do well, as opposed to emulating other bands. With your eclectic album to album sound, where does your musical identity come from?

Townsend: I'm really good at being me. The me that I am is so transient, I just have to keep up with the way my likes and dislikes are evolving and try to be true to that. I think it's easy to fall into the expectations of what people perceive you as. People think of me at some point in my career as being this crazy guy in STRAPPING [YOUNG LAD], and other times I'm this comedian in a suit. Whatever it is, it's very easy to pay attention to what people's perceptions of you are, as opposed to following it where it goes. The guy in a suit thing was me for a bunch of years. Really being able to be open to who the hell I am at this point, or at any point, is fundamental in being honest with that. I think it's also, as I turn into a middle-aged musician now, it's not like I'm a young kid anymore, I'm middle-aged. You feel yourself turning into your dad, or your grandpa, or whatever, and it's terrifying. You want to be "that guy," you still want to be that vital musician, and this younger band is doing this or that and you decide to follow it. That's a slippery slope as well, because eventually you end up being that old guy that's trying to be young. The people that have been so kindly supporting me for so many years will get bored of that, and I'm going to be bored of that. So things like CASUALTIES [OF COOL], it's an honest move for me because again, whether or not people like it or there's an audience for it at all, there's really this sense, at least for me when I listen to it, of authenticity. I was left to my own devices, and I was able to analyze my own desires, wants, likes, dislikes, and mental processes, and that's what came up. There was no pressure, no expectations, no money — that's what happened. When people hear it, I think what you are actually participating in is an authentic experience, and that's as much a part of what I'm doing now as it was when I was doing STRAPPING, or ZILTOID, or OCEAN MACHINE — it's the same shit. It's just a different aesthetic as you get older and you have to follow that.