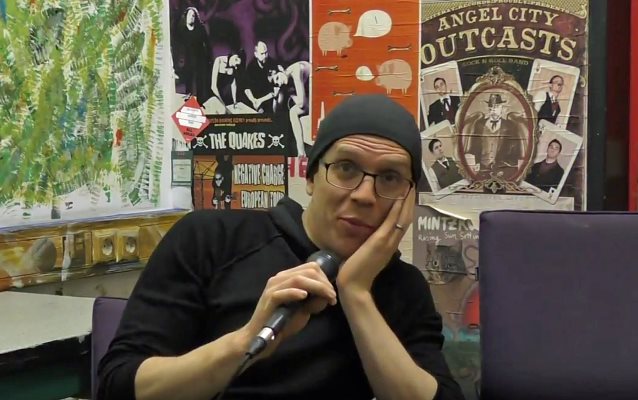 Mike Seidinger of Austria's Stormbringer.at conducted an interview with Canadian musician/producer Devin Townsend prior to DEVIN TOWNSEND PROJECT's February 14 gig at Arena in Vienna. You can watch the full chat below. A few excerpts follow (transcribed by BLABBERMOUTH.NET).

On relinquishing some control on DEVIN TOWNSEND PROJECT's 2016 "Transcendence" album:

Devin: "Everything is a learning process. I think it also comes down to the fact that in order to continue doing this, you got to have something you can sing about that makes you feel like you're not just… lying. You have to dig into yourself and see where that growth is going to occur. I think that's what it was. It was one of these things that as I got older, the writing was on the wall that my need to control everything was probably rooted in insecurity more than anything else. That being said, I still had the vision for the record, and wrote it in many ways exactly like it had been done in the past. It's just the way we ended up assembling it as a band involved a lot more of their objective opinions on what it is that I was writing than I had before. It resulted in something that is stronger than had I done it on my own at this point."

On whether he worries he'll ever run out of ideas:

Devin: "There's a difference between writing and writing good music. I think it's all at this point about checks and balances. You have to be aware enough of yourself and aware enough of what you're doing in your own life to be able to, as you're writing, recognize which songs are important. If it's not important to me, it's not going to be important to the listener. I think that's why it has worked for so long. I try to create an atmosphere with the music that the listeners can participate in. Whatever it is I felt during the year I was writing, I try and make the records have that effect on people. You have to be very precise with the colors and shapes and the themes, sounds, and the tones in order for people who have no idea or no connection to your past or this year, listen to it and say, 'Oh, I get it. I understand this vibe.' Creativity, for me, is something that goes hand in hand, which is progression as a person. Sometimes you win, sometimes, you lose."

On whether he's accepted the fact that recording albums is a "nightmare" for him:

Devin: "I've always wondered that. I really hope not. That would be really disappointing to think you're just being a martyr for whatever bullshit you happen to think is appealing at that point. I don't think I want the nightmares. I think that in a similar way, but different, the vision is so important to me that I'm willing to continuously have nightmares. But I don't crave punishment at all, like, holy shit, man. I don't crave drama either. I proactively have been trying to find ways to attract things to my life that aren't dramatic through people or situations. There's people I know that are just constantly exploding bombs. People that I even care for, that their whole life is drama. It's like, every time I hear from them it's some horrible thing, but it all seems to be self-imposed. I'm, like, 'This is the same thing you did in the past that caused you problems. Either you're choosing not to see the pattern, or you love it.' There's also the other side, if you don't learn and you're oblivious, that's one thing. I think there's some people who are really clever that have to be aware that the patterns are repeating. If you can identify the things in your life that are causing this to happen, yet continue, I have to distance myself from people like that. I don't have a lot of energy to feed into that. A lot of times people who really like that drama require other people to validate it. Like, to drag other people into this drama and all of the sudden you're in this dark place. Like, 'How the fuck did we get here?' I've chosen people to be around, that although we all are normal people and have ups and downs, everybody is seemingly proactively trying to become better as opposed to just comfortable in that suffering."

On his upcoming "The Moth" orchestral project:

Devin: "I think it's a lot like drugs. You start with a little bit of weed, then you need a lot of weed, then you need a big bong, then you need mushrooms, then acid, then Ziltoid, then cocaine, then heroin, then you're dead. Same with the creative stuff for me. I need bigger and bigger kicks for me to be interested in it. I love playing bass, I love playing quiet guitar, I love doing what I do, but in order for me to be interested in making a big spectacle, it has to be more and more over the top. 'The Moth' is a project that has a very basic but convoluted theme about power and sex and god and death, basically. It's a completely open slate for me to illustrate that in profoundly offensive ways with symphonies and a choir."

On whether his fans find him to be boring in private:

Devin: "I hope so. I love being dull. I think a lot of times, what I've hoped to do through social media or any of these things is maybe pull back the veil a little bit. I think our society has a need for gods and martyrs, and none of us are either. A bunch of us are martyrs for sure. Gods, no one has any answers. No one is any better or worse than anyone else. It's just a bunch of fucking humans trying to figure out how to exist. With that, sometimes people, like last night, there are people who waited outside. It was really cold. I came outside and the impression they gave me was that I was very different from them. Somebody made a comment that I seem very normal. And I'm like, 'Fuck yeah!' Which is disappointing in a way, because you want to be considered normal. I don't want to be considered a freak or an anomaly. I like to think that because I'm sober and because I've had a lot of experience and because I get bored, my creativity is just, I don't have any parameters on it. I'm not worried about doing something that's going to sell or offend people. I just have fun. I have a bunch of people around me who help me do that. If people think that is fundamentally brilliant or insane or any of these things… it's neither. I've been doing this for a long time, I've learned how to do it well, and I enjoy it. In private, I like making furniture and taking care of the family. I'm not a scientist, I'm not a genius, I'm not insane."