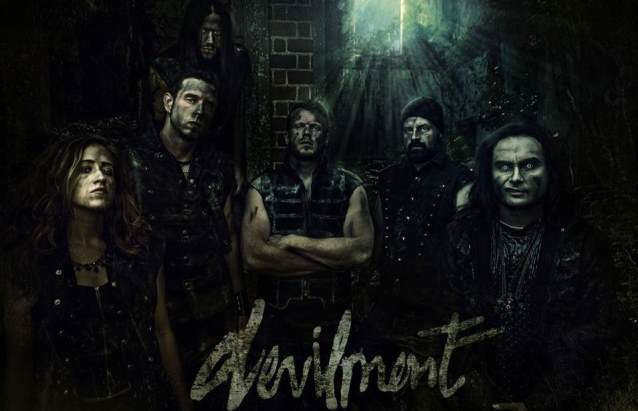 Ipswich, Suffolk, U.K.-based band DEVILMENT, featuring vocalist Dani "Filth" Davey of British extreme metallers CRADLE OF FILTH, is poised to ink a deal for the release of its debut album, "The Great And Secret Show".

Recorded at Grindstone studios by producer Scott Atkins (BEHEMOTH, CRADLE OF FILTH, AMON AMARTH) and featuring ten tracks of dark, psychotic groove and brutality, the CD, which is ninety percent near completion, opens another whole can of metal worms for Filth.

"This record possesses a very dark, creepy carnival vibe at its essence, but the majority of the time is it bludgeoningly heavy and very twisted, melodically," he says. "The six of us have worked very hard to write a collection of songs that does the album title justice, all swathed in a very unique and fatal horror eargasm."

Tentatively due in the fall, the album's artwork — which is also ninety percent completed already — has been beautifully created by graphic artist extraordinaire Drake Mefestta.

Originally formed by Finch back in late 2011 amidst a bout of religious delirium, DEVILMENT consisted of Simon Dawson (STEVE HARRIS, ex-DEARLY BEHEADED) on drums, Justin Walker (13 CANDLES) on bass and Kieron De Manns (ex-THE VOICE) on keyboards, with the band experiencing a myriad of problems holding down a stable vocalist.

Enter Daniel's friend Dani Filth, who, "although not entirely stable mentally," agreed to help out on a couple of tracks, which then turned swiftly into a studio demo, completed after Dani finished work on CRADLE's "The Manticore And Other Horrors" album last summer. The demo, known as "Grotescapology", featured eight tracks, which, although psychotically competent, were used solely as a backbone for a new line-up when Simon Dawson suddenly departed to record and tour the Steve Harris BRITISH LION album, and the remaining two members agreed that work and distance were conspiring to keep them from dedicating enough time to the band. Fortunately, at this point, destiny sat on a posturing horse, was proud to usher Nick Johnson (bass), Dan Jackson (guitar) and Aaron Boast (percussion) into the fray, three extremely competent musicians who suddenly grew out of the local music scene, and soon the band was at full steam once more and starting to write as a combined unit.

A five-minute question-and-answer session with Filth about DEVILMENT can be seen below.