Tickets will go on sale this Friday, December 16 at 10:00 a.m. local time. Check your local venues for ticketing information.

DEVILDRIVER frontman Dez Fafara states: "DEVILDRIVER is heading out on our first headline run in over three years with a killer set list and full production, AND we are bringing some heavy, badass bands along with us! Get your tickets early and come out with some friends, 'cause this tour is going to be a monster banger!"

"Bound By The Road" tour follows DEVILDRIVER's performance at Ozzfest Meets Knotfest, where the band shot its newest music video for the track "Trust No One".

"Trust No One" is the title track of DEVILDRIVER's seventh studio album, which was released on May 13 via Napalm Records. The follow-up to 2013's "Winter Kills" was once again produced by Mark Lewis (ARSIS, THE BLACK DAHLIA MURDER, WHITECHAPEL, DEVILDRIVER, DEICIDE, SIX FEET UNDER) with assistance from Jason Suecof (AUGUST BURNS RED, DEICIDE, DEATH ANGEL). The new CD marks the group's first release since the departures of guitarist Jeff Kendrick and drummer John Boecklin and addition of axeman Neal Tiemann and former CHIMAIRA sticksman Austin D'Amond.

DEATH ANGEL's latest album, "The Evil Divide", entered The Billboard 200 chart at position No. 98 with first-week sales of just over 6,000 units — nearly all from pure album sales. The set follows the No. 72-peaking "The Dream Calls For Blood", which opened with around 5,400 copies back in 2013. 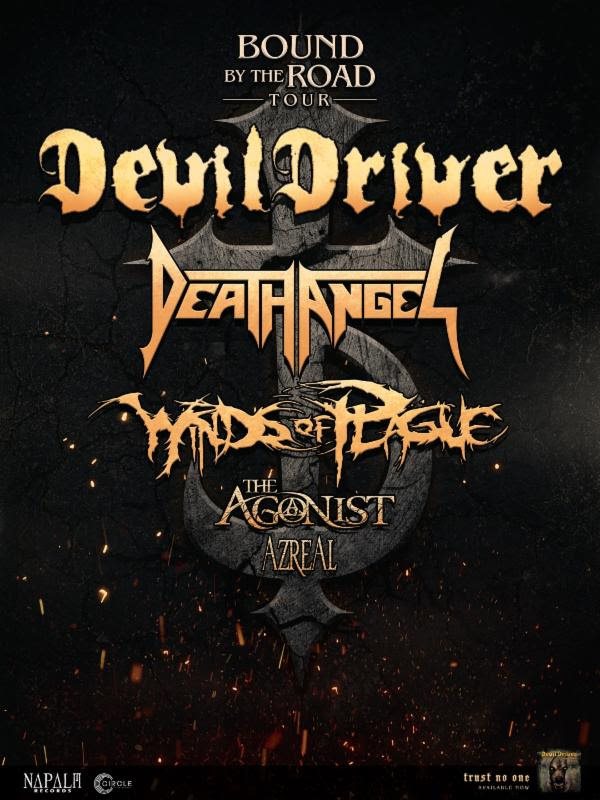