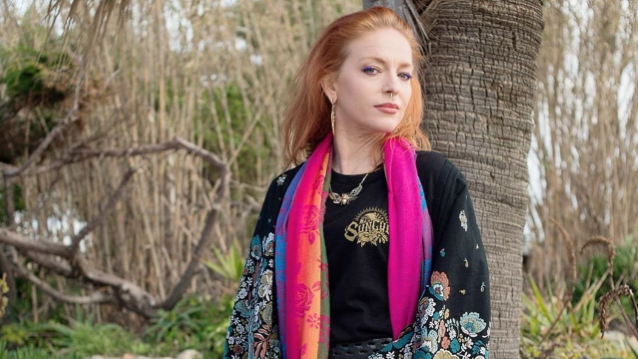 Anahstasia Fafara, the wife of DEVILDRIVER frontman Dez Fafara, has been given a "clean bill of health," two months after she was diagnosed with invasive malignant melanoma, a form of skin cancer. Invasive means the melanoma had gone under her first layer of skin, putting her at risk of it getting closer to her blood supply and lymph nodes, where it would spread.

Dez revealed his wife's cancer diagnosis in October, announcing that DEVILDRIVER was dropping off the Megacruise and its tour with STATIC-X so that he could be by his wife's side as the received treatment for the disease.

On Saturday, Anahstasia disclosed that she underwent surgery for the skin cancer and was subsequently given the "all clear" by doctors.

She wrote in an Instagram post in part: "My surgery was successful. A very large deep incision on my leg returned 'clean margins,' meaning they removed all the cancer." She added that she "must be seen every four months" for the rest of her life to have ultrasounds and scans.

Dez's wife of 20 years, Anahstasia is involved in several business ventures with her husband, including The Oracle Management, The Oracle Merchandise Company and the SunCult clothing brand.

Melanoma is the most deadly form of skin cancer, but also highly preventable.


Part One ☝? Today I want to share with all of you some Amazing News! This may be a long post?‍♀‍ Almost two months ago I was diagnosed with Invasive Malignant Melanoma aka Skin Cancer. Most melanoma under the skin grows from left to right and mine was growing DOWN,which was not a good sign. It surely what would have been a much longer time period meaning if we went by the doctors that tried to schedule my appointments months out but my pushy and loving bull of a Husband was not going to let that Cancer just grow in me, so he took matters in his own hands and was extremely involved and had appointments and surgeries scheduled within weeks!! My surgery was successful? A very large deep incision on my leg returned “Clean Margins” meaning they removed all the Cancer! We were awaiting tests from another incision on my lymph nodes which they removed to check if it had spread. I had an amazing surgical team in Doctor MATTHEW Selleck and his partner RN Garret ... FYI as they wheeled me into surgery they were blasting Nirvana Lol I knew then I was in very good and capable hands!? Next was an intense months long waiting game as they went over with not one but three pathologists to determine why I had a few dark cells in with my lymph nodes that clearly were not melanoma but were of concern. After 3 pathologists and a round table of Oncology doctors reviewed my cells they all determined that indeed fair haired , light eyed people and others sometimes have some dark cells in the lymph nodes nodes and that these were not a concern to them -Just an Anomy.. this gave me and my family the Clean Bill of Health but I must be seen every four months for the rest of my life to have ultra sounds and scans. I wanted to thank everyone who showed myself and my family love and concern. I know there are many dealing with a much worse cases of this deadly disease all over the World, my empathy and heart goes out to all the families enduring, waiting on tests, having surgeries and basically living at hospitals to try and survive. This has been a life changing event for myself, my husband and all of our close family. See following post for Part 2