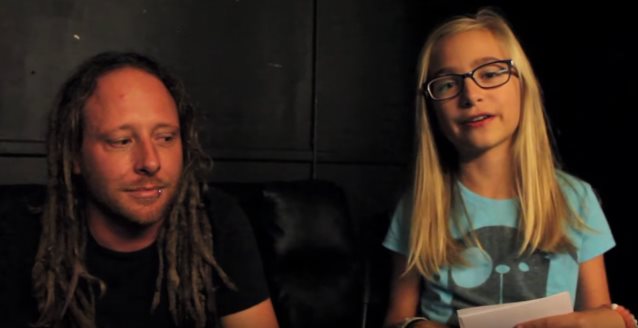 Piper of KidsInterviewBands.com conducted an interview with DEVILDRIVER guitarist Mike Spreitzer on October 16 at Newport Music Hall in Columbus, Ohio. You can now watch the chat below.

DEVILDRIVER's latest album, "Trust No One", was released in May via Napalm Records. The follow-up to 2013's "Winter Kills" was once again produced by Mark Lewis (ARSIS, THE BLACK DAHLIA MURDER, WHITECHAPEL, DEVILDRIVER, DEICIDE, SIX FEET UNDER) with assistance from Jason Suecof (AUGUST BURNS RED, DEICIDE, DEATH ANGEL).

Spreitzer recently told Metalshop TV about the songwriting process for DEVILDRIVER's latest CD: "With 'Trust No One', I got to basically do almost whatever I wanted within reason. I didn't wanna get too far out there with 'Trust No One', because there was a big lineup change and I didn't wanna throw our fans for a loop, but I think on the next record, I'm gonna take some more chances and mix things up a bit."