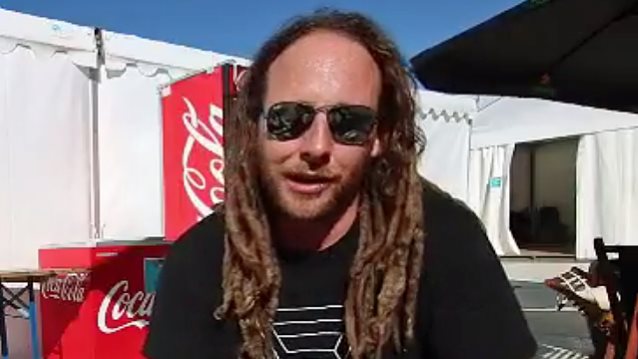 Frédéric Bellec of France's Pavillon666 conducted an interview with DEVILDRIVER guitarist Mike Spreitzer after the band's June 10 performance at the French edition of the Download festival in Paris. You can watch the full interview below. A few excerpts follow (transcribed by BLABBERMOUTH.NET).

On whether DEVILDRIVER's recent lineup changes affected the songwriting process for their latest album, "Trust No One":

Mike: "It was a good thing for me because it gave me a lot more freedom. I was the new guy in the band because I wasn't an original member. I came in during the first record cycle, shortly after the first record came out. Then we lost our bass player, Jon Miller, he quit the band. He was one of the main writers, then it became me and John Boecklin [drums] writing together. I always treaded lightly. I knew Boecklin had been in the band longer than me, so obviously, he's going to write more. When he quit the band, as much as I missed him — he and I still are very good friends, but it was nice to start fresh. When I went into this record, I was very adamant about that I was going to write everything and no one else is going to write. But Dez [Fafara, vocals] introduced me to Neal [Tiemann, guitar] and once I met him, it took me about five minutes and I was really into his style, I was really into his personality. Austin [D'Amond, drums] was there the same day, I met them both the same day. We just started writing together and they're just two of my best friends now. We passionately love each other's company, we have a lot of musical interests in common. We've never gotten into one single argument for the whole writing process. It was the most fun record I've ever done."

On whether he finds time to compose new music while on tour:

Mike: "Sometimes. It kind of depends on the tours. Festival tours like this? No. I'll never have any time for writing. We have to play somewhere between one o'clock in the afternoon to ten o' clock at night. Every day is different, we're jetlagged, but I have written on tour. One of our more popular songs like 'Hold Back The Day', I wrote that when we were on Ozzfest in 2004. I have written stuff; there's stuff on 'Trust No One' as well that I wrote."

On whether he and his DEVILDRIVER bandmates engage in the "rock and roll lifestyle":

Mike: "I don't think it is what it used to be. The amount of money floated around is… I think, egos have dropped quite a bit and people have humbled out a lot since the '80s and the '90s when there was tons of money being poured into the music industry. It's not like that anymore. I think the cool part of it too, is that it's made a lot of people humbled. Money can really make people very egotistical and I've heard stories, you'll hear all the time that rich people are miserable and people that are poor and rely on one another in their community, when you look at it, they have a happier life. Not saying that we're poor. [Laughs]"

On the effect downloading and music streaming has had on DEVILDRIVER's career:

Mike: "The cool thing is that illegal downloading is really on the decline thanks to streaming services. I finally got on Spotify, maybe about three or four months ago. I love it. I absolutely love it. It's great. The way they make playlists and I've got a computer, a laptop and an iPhone and I'm always in different parts of my house and my studio and the way you can switch in between them, it's the greatest thing. It was in The Wall Street Journal, I read an article how much because of these services, people have stopped stealing music. It's so easy and everything's there."

DEVILDRIVER is currently working on an outlaw country covers album, "Outlaws Till The End", tentatively due in early 2018. The disc will contain thirteen "insanely heavy, swinging badass outlaw tracks by some of the best outlaw country artists," including Willie Nelson, Johnny Cash, Waylon Jennings and Johnny Paycheck, according to Fafara. Produced by Steve Evetts, the album will feature appearances by nearly two dozen "high-caliber guests," among them Glenn Danzig, LAMB OF GOD's Randy Blythe, TESTAMENT's Chuck Billy and guitarists John 5 (ROB ZOMBIE) and Mark Morton (LAMB OF GOD).