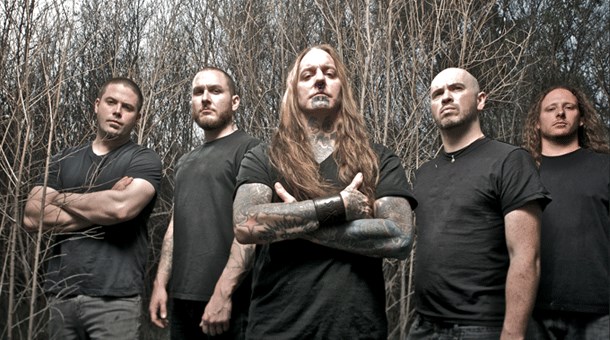 Jeffrey Easton of Metal Exiles recently conducted an interview with vocalist Dez Fafara of Californian metallers DEVILDRIVER. A couple of excerpts from the chat follow below.

Metal Exiles: Everything I read on you refers to DEVILDRIVER as groove-oriented metal but I think your sound is more ferocious than that but with melody. How does DEVILDRIVER balance the ferocity with the melody that turns up in the music?

Dez: I think we are definitely the square peg in the round hole as you cannot fit us into these genres that are happening now. Long ago, our fans started referring us to the California Groove Machine, and I accepted that title because nobody else is referred to as that. We always have a form of melody with, as you said, ferociousness and it is important to try to balance the two. This record ["Winter Kills"] has a lot of tight arrangements as we really got down and concentrated on the songwriting as we wanted the hooks and choruses to stand out. The way we balance it is that we make sure the arrangements are tight and every song had a special momentum.

Metal Exiles: With the title "Winter Kills", the theme is very dark. What made you want to take this mental route?

Metal Exiles: What points to a rebirth for you?

Dez: You have to take the lyrics for what they are and I am always that guy who will crack open the door and show you a little bit of light, so sometimes you have to point out the negative to do that. If you take the lyrics and really look into them, you will see those places. The record as a cohesive whole really points to that. The band has a new label with Napalm and a new bass player, Chris Towning, so it really is a rebirth for us. This is our sixth record and we really found out who we are and what we do best with our sound. We have five different records with different sounds, but to me, "Winter Kills" really captures who we are.

Metal Exiles: I know you like being home with your family so you recorded your vocals at home. What was that like as opposed to going to a studio?

Dez: You find yourself thinking that if you displace yourself, putting yourself in the odd place out, making yourself uncomfortable will give you a feel that metal needs, but for me, that's not the case. I was getting to a point that I was saying, "OK, I got four more songs and I can go home." I did not want to do that, I did not think the listeners deserved that nor the art. I was just done with being gone for months on end just to record a record. So I put a vocal booth downstairs and I think it added a lot to the feel of the record. The clock wasn't ticking; we got a lot of the tracks on the first take and if I wasn’t feeling it that day we could just call it quits. It made me feel more comfortable while recording because I was in a state I created. It was very moody, no direct lighting on me and I think that lent to the attitude of the record.