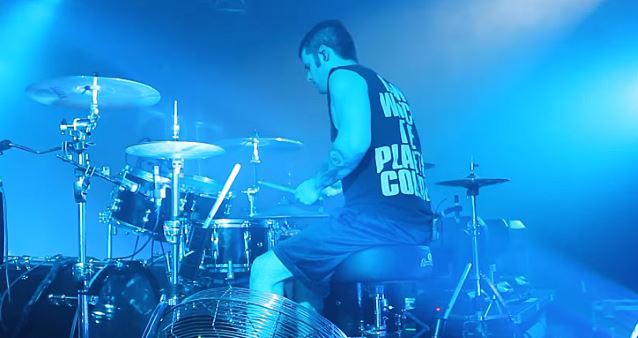 DEVIL YOU KNOW, the band fronted by former KILLSWITCH ENGAGE singer Howard Jones, has recruited drummer Nick Augusto (ex-TRIVIUM) to sit behind the kit for the group's upcoming tour with HATEBREED and DEVILDRIVER starting this Friday, May 13.

DEVIL YOU KNOW guitarist Francesco Artusato states: "We are very excited to start this next tour with Nick. I toured with him in the past and I'm really looking forward to play some great shows with him.

"We also are just wrapping up our first nationwide headlining tour with ONI, which has been going extremely well. We are red hot and firing on all cylinders, so we can't wait to join up with the mighty HATEBREED and DEVILDRIVER to play in front of some new faces, as well as many familiar ones. Be sure to come by our merch booth after the set to check out all new items and hang with us. Let's do this."

Augusto adds: "I'm honored to be on board as DEVIL YOU KNOW's touring drummer for this massive HATEBREED and DEVILDRIVER tour. As being a fan of everyone in the band's previous projects, I feel like my style will add another piece to the already growing expansion of their big, heavy and catchy sound. I am very excited to play their material live and see the reaction of their fans, and what kind of energy surfaces from these upcoming shows! Come out and have a good time with us. See you out there."

DEVIL YOU KNOW recently launched a live performance music video for the song "Consume The Damned", which features all footage from the band's 2015 European fall tour with FIVE FINGER DEATH PUNCH and PAPA ROACH. The track is taken from DEVIL YOU KNOW's sophomore album, "They Bleed Red", which was released on November 6, 2015 via Nuclear Blast.

In a recent interview with Australian Musicians Network, Jones stated about "They Bleed Red": "With the first album… We wrote and recorded that album without ever having played in the same room together, so it's kind of unique. But yeah, we've been spending a lot of time together on the road, planes and just doing our thing… getting to know each other well. And I remember [saying on] the first tour, 'We've gotta make a heavier album this time,' That was definitely the plan. Just also make songs that are fun to play live and that we are really happy with, that are a challenge to write and craft — whether they are heavy or not as heavy, even though, most of the album is pretty heavy. We wanted songs that would be easy to listen to, easy to enjoy, and fun to play."

He added: "Spending time on the road together, sitting on a plane, and sitting inside a smelly van, watching TV on a bus together, hanging out in each other’s houses and things like that, you get to know each other and you get this bond. And it definitely made things easier. One difference is that I was so much more prepared before I went into the studio for this one. And getting to know each other, and knowing exactly what direction we want to take with the album."