Presented once again by Slave Pit Inc. and sponsored by Ring Dog Rescue, the fifth annual GWAR-B-Q and Dave Brockie Memorial will certainly go down in history as one of the most significant events to happen in Richmond since the Civil War.

In a celebration of the life of David Murray Brockie, a special memorial event will be held free to the public from 4:00 p.m. to 7:00 p.m. only on August 15 at Hadad's Lake (located at 7900 Osborne Turnpike Richmond, Virginia). Fans, friends, family and bohabs will have the opportunity to pay their respects, as they drunkenly toast with a GWAR Beer in one hand, while wearing the commemorative Dave Brockie Fund vomit stained t-shirt as Oderus Urungus is set ablaze in a Viking Funeral Pyre on the lake.

In keeping with the tradition of past GWAR-B-Qs, Slave Pit Inc. has revealed the first bands confirmed for the event. The GWAR-B-Q will feature the heaviest and most legendary lineup of bands that the metal and punk scenes have to offer. Heavyweights such as HATEBREED, hometown heroes KEPONE, with former GWAR member Beefcake, the infamous THE MEATMEN, featuring the Dutch Hercules, Tesco Vee, and a very special appearance by the original gangsters, BODY COUNT, where TV executives were bribed and beaten to get Ice-T off the set of "Law & Order: Special Victims Unit".

"The magnitude of heavy, bone-crushing acts at this year's GWAR-B-Q is enough to … aahhh…crush bone," said Bonesnapper, GWAR's bodyguard.

And if that's not enough, there is plenty more filthy fun to overload your senses, leaving you bloated, basted, and completely broke. There will be more meat than ever, boatloads of "GWAR-B-Q" sauce to slather all over it, GWAR's new beer "Killsner" to wash it down your bottomless and gaping feed-hole, as well as an infinite number of port-o-john vomitorium kissing booths for full body evacuation. Just like last year, the affair will be held at the only venue capable of handling such a stupendous event, the legendary Hadad’s Lake.

As our beloved bohabs would come to expect, the Slave Pit has yet again produced its customary GWAR-B-Q commercial commemorating the beastly birthday of the fifth annual GWAR-B-Q. This year's clip heavily features Oderus Urungus' final film performance.

Although Oderus will not be there physically, his spirit will reign over the event. 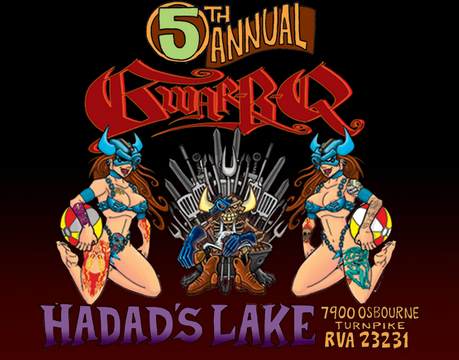