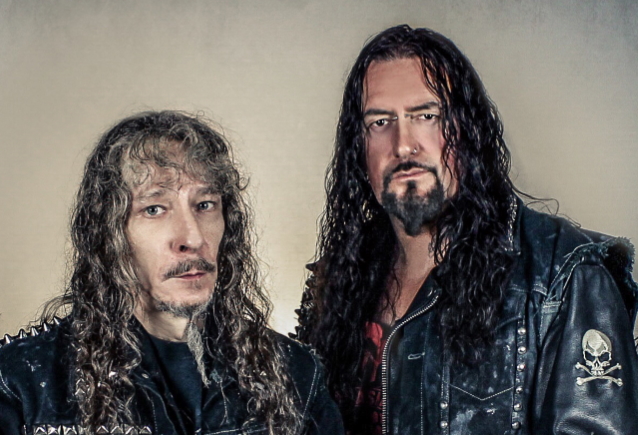 DESTRUCTION frontman Schmier says that the band's founding guitarist Michael "Mike" Sifringer has "disconnected" from the rest of the group and is not featured on DESTRUCTION's just-completed new studio album.

Schmier addressed Sifringer's status with DESTRUCTION just a couple of weeks after the band performed without Mike at the Area 53 Festival in Leoben, Austria.

Asked in a new interview with Metal Pilgrim to clarify where Sifringer stands with regard to DESTRUCTION, Schmier said (as transcribed by BLABBERMOUTH.NET): "I would like to know myself too. It's a very difficult question because he disconnected from the band some months ago already. It means we went to the studio and recorded a new album, and he just didn't come. We did demo sessions, writing new songs, and he didn't come to write songs with us. After I tried to face him with the problems, he disappeared and he kind of disconnected with us. There's definitely some deeper problems I don't know yet. We'll still give him a little time — till the 19th [of August], till we have the press release.

"We recorded a new album. We wrote new songs. And we will also have a special surprise on the 19th for the fans.

"Of course, we're not gonna stop," he continued. "Mike is a founding member, and he was always important for the band, but if he doesn't wanna do this anymore, I cannot help him. And I also cannot look behind the curtain. Nobody can be forced to do what you wanna do.

"For me, it's disappointing in one way. It's also shocking. But I've been in this business for too long. I know those things can happen. I always told him we're not gonna close the door on him. It's his decision. And we'll see what happens.

"For me now, I have to survive," Schmier added. "I have to keep the band alive. We had some really difficult moments keeping the band together, finding a new label also — we switched from Nuclear Blast to Napalm Records also. We had to finish the live album also, even knowing that Mike might be leaving us after the release. So it wasn't easy for us. But I'm trying to focus now on the future of the band. And I'm happy we have a great team around us. We have a great team in the band. And we're all good friends. And what happens to Mike, it's in his own hands, basically. So, hopefully, in two weeks we're gonna have a press release with an announcement that exactly shows what's gonna be it for him, at least. Because the band will continue nevertheless.

"Some fans came to me and said over the last years, 'What's wrong with Mike? He looks unhealthy,'" he said. "I tried to communicate this with him, [about] his lifestyle. It's always a lifestyle thing.

"Some people like to live healthy, do sports, [stay] clean — no drugs, no alcohol, or have at least kind of a regulated life. And some other people like to… They don't give a fuck about the way they treat their body. And it's kind of obvious, if you look at Mike's health the last years, he didn't wanna change his lifestyle. Drinking and smoking and whatever comes in, when you get older, you've gotta change something.

"I'm not a huge fan of THE ROLLING STONES, but I think their way of doing it till they're old… I have so much respect for this," he continued. "Because one day in your life, you've gotta cut down all that shit. You've gotta cut down the drugs and the fucking drinking and the hangovers every day, because you wanna perform for your fans on a high level. And it's only possible when you have some discipline.

"When we were 17, music was fun and was a hobby and it was great to party. We didn't have sleep, we didn't care because we could still perform. But when you get older, you need to be on top of the shit and you need to watch yourself. That's something that I had a different vision than Mike. And that's all I can say about this.

"He's his own person. He can do whatever he wants. And if he wants to live his life this way, it's his call."

Sifringer is the only member of DESTRUCTION to have remained constant throughout the band's career. Schmier appeared on DESTRUCTION's first three albums before leaving the band and being replaced by POLTERGEIST vocalist André Grieder. André's sole recorded appearance with DESTRUCTION was on the "Cracked Brain" album, which came out in 1990. Schmier rejoined DESTRUCTION in 1999.

DESTRUCTION will release a new Blu-ray and CD, "Live Attack", on August 13 via Napalm Records. The 22-song release includes footage of the band's nearly two-hour livestream concert from January 2021 at the legendary Z7 venue in Pratteln, Switzerland.

In May 2020, DESTRUCTION delivered a treat for fans stuck at home and unable to attend live shows: "Born To Thrash - Live In Germany", the band's first live album with the most lineup, was made available digitally on all streaming and download platforms.

DESTRUCTION's latest studio album, "Born To Perish", was released in August 2019 via Nuclear Blast. The disc was recorded in January and February 2019 with V.O. Pulver (PRO-PAIN, BURNING WITCHES, NERVOSA) at Little Creek Studios in Switzerland and is the first DESTRUCTION album to feature Randy Black on drums and second guitarist Damir Eskic.