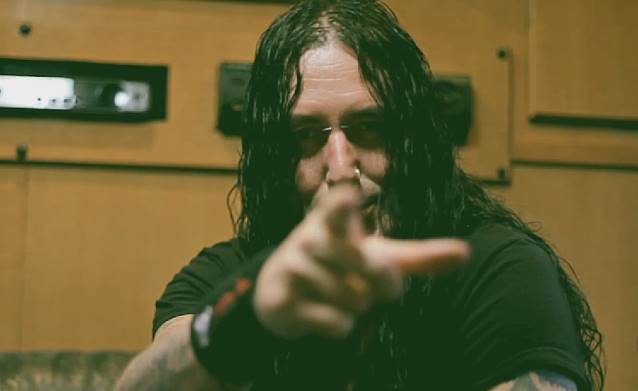 On March 12, singer/bassist Schmier of German thrash metal veterans DESTRUCTION was interviewed by Nick Perkel (a.k.a. Japan Nick), a contributing writer for The Aquarian Weekly and host of "Japan Nick's Rock And Metal Pandemonium" on Montclair State University's WMSC 90.3 radio station. Asked about his recently announced side project with members of ACCEPT, Schmier said: "It's actually the drummer, Stefan [Schwarzman], who used to play for RUNNING WILD for many years, and he's playing for ACCEPT now for many years also. And it's Herman Frank, the guitar player. We met on several festivals in the last years and we've been hanging out. And they're great guys. And we liked each other since point one. And somehow we had this crazy idea that in between ACCEPT and DESTRUCTION breaks, we could do something together. Because Stefan lives very close by now; he moved down here where I live. So we started to do some stuff, some rehearsals, and it turned out really great."

He continued: "I've been doing this HEADHUNTER project back in the '90s, and that was also a mix of classical heavy metal with a little bit of DESTRUCTION. So now I'm gonna go back to using my DESTRUCTION vibes, but the music is gonna be much more classical heavy metal, but it's also, of course, gonna be more heavy and a little more powerful than ACCEPT stuff. So it's gonna be a nice mixture. It fits really well.

"We have already written five songs. It's actually still not really so official. So you're one of the first persons that is interviewing me about this. I only did one interview before, with a guy from Israel, who basically put this on Blabbermouth back in the day.

"We still don't have a name for the band. We're writing songs right now, and as soon as we have a demo, then we're gonna put out an official statement. But we're having those five songs recorded now as a pre-demo, so when I'm coming back from [touring] the States [with DESTRUCTION], then we're gonna enter the studio and record a pre-recording for the final album. So I'm excited. It sounds great. It sounds fresh. To me, it's something different than DESTRUCTION, so it's a great experience. And the guys are, of course… especially Herman, he's a little bit older than me. He's like my big, old brother. He has a lot more experience. Even if I am in the business for a long time, he has some more years, so I can learn from him. And it's very interesting."

He added: "I love classical heavy metal; it's my fucking favorite. And it's gonna be fun to do that. So I'm really looking forward to it. It's a great side project.

"I'm not somebody who likes to sit at home the whole day. I like to be entertained and play music and have fun. And I'm looking forward to this new thing."

Regarding whether fans can expect to hear the first music from the new project before the end of 2014, Schmier said: "It could be by the end of this year. If everything works out, we're gonna have demos in April/May. Then look for a label. So we could enter the studio in the summer. So I hope it's gonna happen. But, I mean, I have to do a DESTRUCTION album also, which will have top priority, of course. So we'll see how everything goes. But I think the way it goes right now, the project will be [in the studio] earlier [than DESTRUCTION]. 'Cause we have five songs done, and we already have new ideas. So if we find a good label fast, then it should be out by the end of the year."