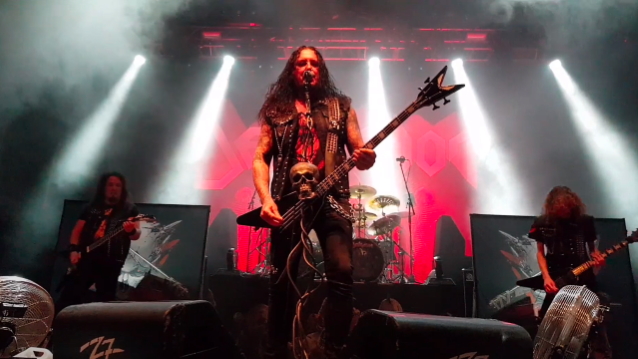 German thrashers DESTRUCTION played their first two concerts after the coronavirus pandemic closures on July 3 and July 4 in Pratteln, Switzerland. In response to COVID-19 restrictions, only 300 tickets were made available for each show at the 1,600-capacity Z7 club. According to DESTRUCTION frontman Schmier, 250 people attended the July 4 gig, and 300 fans were present at the July 3 show.

DESTRUCTION has now released a seven-minute "aftermovie" capturing the highlights of the band's return to the live stage. Check it out below.

Schmier states: "I am very glad that our film team could capture those moments. The first shows after the loosening of the rules in Switzerland for concerts were for sure a special moment for all of us. The fans did a very good job, and the social distancing worked pretty well. For sure much better than in the supermarket or on public transport these days. We all felt safe and sound, and sure, you cannot completely avoid contact, but you can use your common sense. The precautions and government rules have been implemented well and that was important for everybody involved.

"It will still be very challenging to bring concerts back into our lives. If masks will be a part of that future or other precautions, the next weeks will show. It is important to take the new challenges and try — instead of doing nothing and just accepting the situation of no shows!

"DESTRUCTION will continue this path and play a social distancing open air close to Berlin in August. A concept that works for a while in Germany and now this now the first METAL show in that format.

"Thanks for all the support & stay healthy and aware!"

A couple of weeks before the Z7 concerts, Schmier spoke to Anne Erickson of Audio Ink Radio about the prospect of playing shows amid the pandemic. He said: "It feels a little bit surreal. Nobody expected this to come back so quick, but we're in the lucky position to live on the Swiss border, and Switzerland is far ahead of all the other countries … And there are very little corona cases, so that will be an interesting experience… It's going to feel weird to play a show again, because this is the first time in 20 years that we didn't play a show in three months. It's the longest time ever. It's very exciting, of course. We look forward to playing again, but it's going to feel a little weird, for sure."

Schmier also expressed his optimism about the prospect of additional live events in the coming weeks.

"What we're experiencing now is the first trial of concerts, and Switzerland, also, is far ahead, so the whole world will watch the country and see the developments. So, it's going to be interesting, and hopefully we're not going to get hit hard again, but the way things go at the moment, it looks good. Switzerland is open just a couple of weeks already. In Germany, we're still wearing masks when we're going grocery shopping and stuff, but in Switzerland, there's no masks needed anymore."

In a separate interview with The Metal Voice, Schmier said that he is not interested in performing drive-in concerts during the coronavirus crisis. "I'm not playing for cars," he said. "It's wrong — it's just wrong. If this is the last step to do — to play live shows in front of cars — I might think about it. But at the moment, no way — it's not working for metal. Metal people have to move, and we wanna feel the bass. This auto concerts, the music is on your radio, on your stereo in your car. There's no P.A. system. It's not a live impression, really. You're sitting in your car.

"I understand people doing this now, because people are desperate," Schmier added. "But [it's] not for DESTRUCTION. We had the offer to do this, actually, but I don't wanna rip my fans off with shit like this. I'm sorry."

As the coronavirus disease continues to spread, live event organizers have been canceling or postponing large gatherings, including concerts and festivals.

In early April, Dr. Ezekiel "Zeke" Emanuel, one of the key architects of the Affordable Care Act and a special adviser to the director general of the World Health Organization, told The New York Times that he doesn't anticipate it to be safe to return to concerts, sporting events and other mass public gatherings until the fall of 2021.

According to the Centers For Disease Control And Prevention, large events and mass gatherings can contribute to the spread of COVID-19 in the United States via travelers who attend these events and introduce the virus to new communities.

Two months ago, DESTRUCTION delivered a treat for fans stuck at home and unable to attend live shows: "Born To Thrash - Live In Germany", the band's first live album with the current lineup, is out now digitally on all streaming and download platforms.

DESTRUCTION's latest album, "Born To Perish", was released in August 2019 via Nuclear Blast.