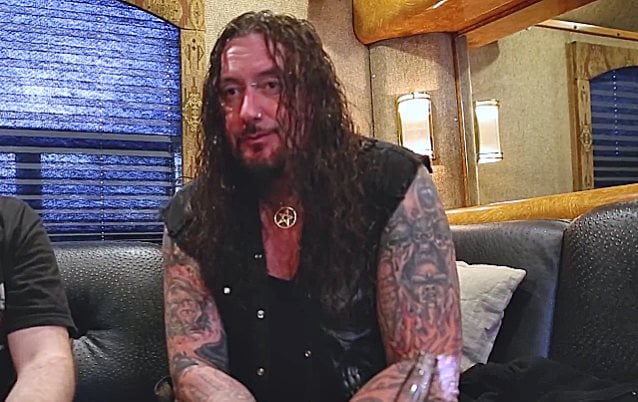 Alex Stojanovic of Metal Master Kingdom conducted an interview with DESTRUCTION bassist/vocalist Schmier when the band played at the Mod Club in Toronto, Ontario, Canada on May 30. You can now watch the chat below.

Speaking about the recent passing of SOUNDGARDEN singer Chris Cornell, Schmier said: "His voice was extraordinary. He was a fantastic singer.

"I'm not a grunge fan. Grunge, for me, was actually horrible, but SOUNDGARDEN was one of the grunge bands I liked and his voice was definitely fantastic."

He continued: "The problem about people that are famous, they are very often very lonely, especially when they're on the road. And a lot of those people have a drug background, and especially with heavy drugs, most [addicts suffer from] depression. And sometimes you don't even know. Sometimes the [seemingly] happiest people are in the depths of depression inside.

"Of course, I was totally shocked when I heard it. It came out of nowhere, because the guy, obviously, looked like he was happy, he had a family. He looked very healthy. He was clean for many years also. Now it seemed he was not clean anymore."

Schmier added: "It must be brutal for his family and his kids. He was far too young. And he had everything — he had success, he had money, he had a family. And he looked great for his age; he looked like 35. And he was a very nice guy. I never met him, but a lot of our Seattle fans said he was always down to earth and he was never an asshole or [acted] like a rock star."

DESTRUCTION's "North America Under Attack" tour kicked off in Oakland, California on May 22 and is hitting nineteen cities, including Chicago, New York, and Atlanta, before concluding in Los Angeles at the Regent Theater on June 11. Direct support on the trek is coming from Los Angeles thrash metallers WARBRINGER and Wisconsin death metallers JUNGLE ROT.