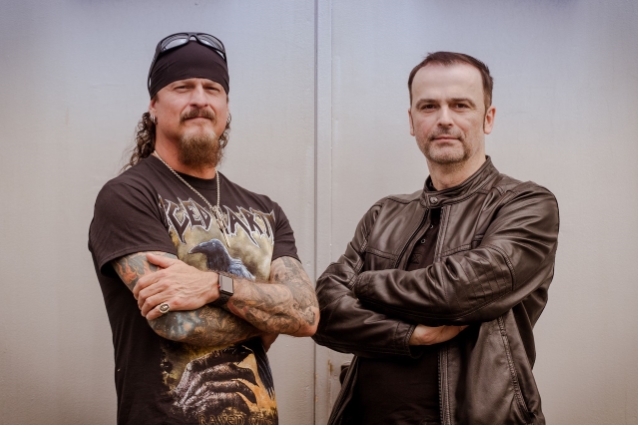 Schaffer spoke about the progress of the songwriting sessions for the follow-up to 2005's "Touched By The Crimson King" during an appearance on the ICED EARTH-centric podcast "Podcast In Stone". He said (see video below): "I have written some of the best instrumental pieces in my entire career in the last few weeks, and I'm very, very excited to hear what Hansi does on top of these things. So, the feeling is really good. He's very into what I sent him. He's gonna start doing some recording tomorrow.

"We had three songs going that we started working on a few years ago, but everything got busy for me with ICED EARTH and him with BLIND GUARDIAN," Jon continued. "But now, once he's really at the finish line on the [BLIND GUARDIAN] orchestral record, and come January, it's gonna be all DEMONS & WIZARDS for both of us for the foreseeable future. So, lots of work going on. But I'm stoked with the stuff that I've written — I mean, very, very happy. We're gonna be taking people on a journey, man — for sure."

According to Schaffer, the plan is for DEMONS & WIZARDS to complete the new album recordings prior to the launch of the summer 2019 festival season, which will see the band performing at a number of Europe's biggest metal gatherings, including Germany's Wacken Open Air, Belgium's Graspop Metal Meeting and France's Hellfest.

"There's so much movement in the DEMONS & WIZARDS world now," Jon said. "It's a big thing that's happening — it's a very big thing. We put the band on sale on a Friday with promoters in Europe, and by Monday, we had secured a headline position on a Friday night at Wacken. That's big. For a project that hasn't been active since 14, 15 years [ago], and didn't even have a Facebook page and hasn't performed since 2000, so by the time we're on stage next summer, it'll have been 19 years since we've played live, to be securing headline positions and co-headline positions at the biggest festivals in Europe… Hansi and I are going, 'Wow!' We knew the demand was big, and how aggressive all the labels are after the products — for the new record and stuff, and to re-release the back catalog — there's a lot happening, and that can't be denied. And the work is going to happen."

Schaffer added that he "hopes" DEMONS & WIZARDS can stick to its goal of releasing the next album in 12 months. "Because we're writing and recording… Well, we're still negotiating record contracts," he explained. "We are reworking the back catalog, which we wanna have out by… April would be great — May latest — before the festivals start. So those two records will be re-released. And then we're hoping that we will have all of our master tracking [for the new album] done before we have to focus on the live shows and the rehearsals for that. I mean, I've still gotta learn those old songs [before performing them live again]. I haven't played that shit since we recorded it — anything on the second album, 'cause we never did any shows on that record, and I haven't played stuff from the first album since 2000. So it's time to learn some songs. So I've gotta write and record a new record; learn the old stuff; we're still negotiating record contracts. And the production of the Wacken show is gonna be pretty badass; we've got some cool plans. So, all of that. I was just over in Germany a few weeks ago, just for meetings. I was there for almost two weeks, and there was no real creativity going on. I mean, creativity — brainstorming about the plan and how everything's gonna roll out. But we met with a lot of people, man, and a lot of key players. We're building a crew and the production of the live show, how we're gonna handle it — there's a lot to this. So, hours and hours and hours of talking — which we have to do. And we have to do that a couple of times a week. Hansi and I are on the phone for hours certain days, because there is a mountain of details. And all of this is happening in a very short amount of time, so we've got our work cut out for us. But it's great.

DEMONS & WIZARDS was launched in 1997 and has released two full-length albums so far: 2000's self-titled effort and the aforementioned "Touched By The Crimson King". The latter was partially based on the "The Dark Tower" series of books (written by Stephen King) in which the Crimson King is the main antagonist.